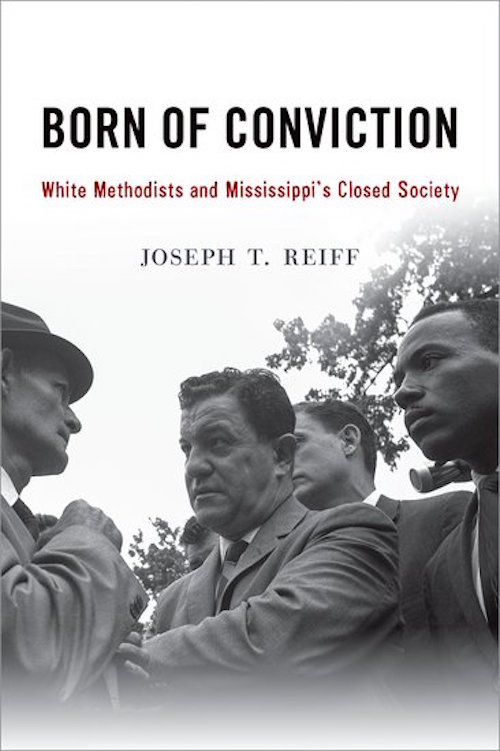 The dominant narrative of the role of white citizens and the white church in Mississippi’s civil rights era focuses on their intense resistance to change. The “Born of Conviction” statement, signed by twenty-eight white Methodist pastors and published in the Mississippi Methodist Advocate on January 2, 1963, offered an alternative witness to the segregationist party line. Calling for freedom of the pulpit and reminding readers of the Methodist Discipline‘s claim that the teachings of Jesus permit “no discrimination because of race, color, or creed,” the pastors sought to speak to and for a mostly silent yet significant minority of Mississippians, and to lead white Methodists to join the conversation on the need for racial justice. The document additionally expressed support for public schools and opposition to any attempt to close them, and affirmed the signers’ opposition to Communism. Though a few individuals, both laity and clergy, voiced public affirmation of “Born of Conviction,” the overwhelming reaction was negative-by mid-1964, eighteen of the signers had left Mississippi, evidence of the challenges faced by whites who offered even mild dissent to massive resistance in the Deep South.

Dominant narratives, however, rarely tell the whole story. The statement caused a significant crack in the public unanimity of Mississippi white resistance. Signers and their public supporters also received private messages of gratitude for their stand, and eight of the signers would remain in the Methodist ministry in Mississippi until retirement. Born of Conviction tells the story of “the Twenty-Eight,” illuminating the impact on the larger culture of this attempt by white clergy to support race relations change. The book explores the theological and ethical understandings of the signers through an account of their experiences before, during, and after the statement’s publication. It also offers a detailed portrait of both public and private expressions of the theology and ethics of white Mississippi Methodists in general, as revealed by their responses to the “Born of Conviction” controversy.

Joseph T. Reiff grew up in Mississippi and graduated from Millsaps College and Emory University’s Candler School of Theology. From 1980-1985, he served as a United Methodist pastor in the Mississippi Conference, and then returned to Emory to complete a doctorate. He is currently professor of religion and chair of the religion department at Emory & Henry College.