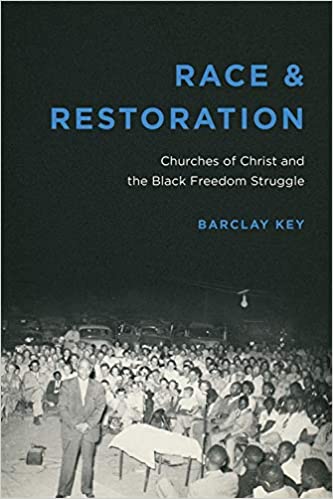 From the late nineteenth century to the dawn of the civil rights era, the Churches of Christ operated outside of conventional racial customs. Many of their congregations, even deep in the South, counted whites and blacks among their numbers. As the civil rights movement began to challenge pervasive social views about race, Church of Christ leaders and congregants found themselves in the midst of turmoil. In Race and Restoration: Churches of Christ and the Black Freedom Struggle, Barclay Key focuses on how these churches managed race relations during the Jim Crow era and how they adapted to the dramatic changes of the 1960s.

Although most religious organizations grappled with changing attitudes toward race, the Churches of Christ had singular struggles. Fundamentally “restorationist,” these exclusionary churches perceived themselves as the only authentic expression of Christianity, compelling them to embrace peoples of different races, even as they succumbed to prevailing racial attitudes. The Churches of Christ thus offer a unique perspective for observing how Christian fellowship and human equality intersected during the civil rights era. Key reveals how racial attitudes and practices within individual congregations elude the simple categorizations often employed by historians. Public forums, designed by churches to bridge racial divides, offered insight into the minds of members while revealing the limited progress made by individual churches.

Although the Churches of Christ did have a more racially diverse composition than many other denominations in the Jim Crow era, Key shows that their members were subject to many of the same aversions, prejudices, and fears of other churches of the time. Ironically, the tentative biracial relationships that had formed within and between congregations prior to World War II began to dissolve as leading voices of the civil rights movement prioritized desegregation.