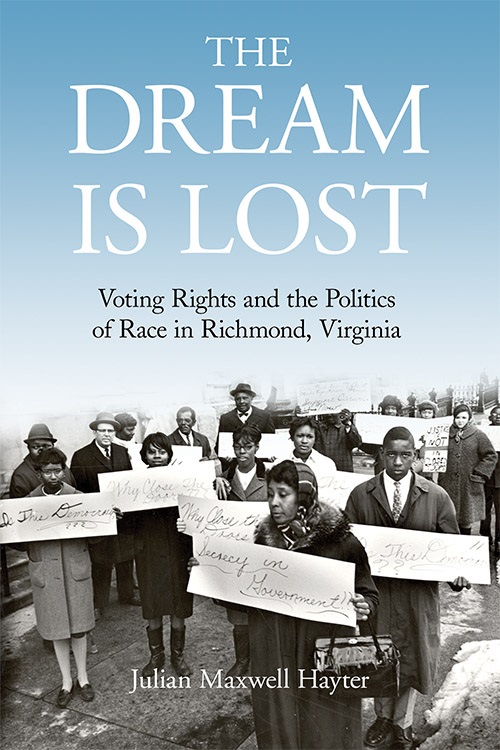 Once the capital of the Confederacy and the industrial hub of slave-based tobacco production, Richmond, Virginia has been largely overlooked in the context of twentieth century urban and political history. By the early 1960s, the city served as an important center for integrated politics, as African Americans fought for fair representation and mobilized voters in order to overcome discriminatory policies. Richmond’s African Americans struggled to serve their growing communities in the face of unyielding discrimination. Yet, due to their dedication to strengthening the Voting Rights Act of 1965, African American politicians held a city council majority by the late 1970s.

In The Dream Is Lost, Julian Maxwell Hayter describes more than three decades of national and local racial politics in Richmond and illuminates the unintended consequences of civil rights legislation. He uses the city’s experience to explain the political abuses that often accompany American electoral reforms and explores the arc of mid-twentieth-century urban history. In so doing, Hayter not only reexamines the civil rights movement’s origins, but also seeks to explain the political, economic, and social implications of the freedom struggle following the major legislation of the 1960s.

Hayter concludes his study in the 1980s and follows black voter mobilization to its rational conclusion—black empowerment and governance. However, he also outlines how Richmond’s black majority council struggled to the meet the challenges of economic forces beyond the realm of politics. The Dream Is Lost vividly illustrates the limits of political power, offering an important view of an underexplored aspect of the post–civil rights era.