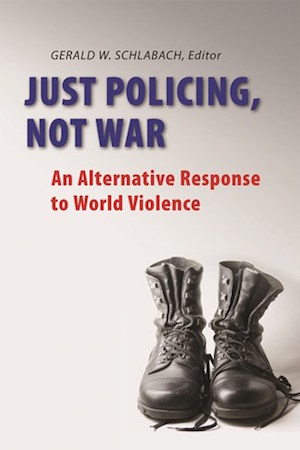 For decades, the Catholic Church and historical peace churches such as the Mennonites have come together in ecumenical discussions about war and peace. The dividing point has always been between pacifism, the view held by Mennonites and other peace churches, and the just war theory that dominates Catholic thinking on the issue. Given the transformation of global relations over this period—increased interdependency and communication as well as the fall of the Soviet Union, emerging nationalism movements, and the slow development of international courts—the time is right to rethink the Christian response to war.

Gerald Schlabach has proposed just policing theory as a way to narrow the gap between just war and pacifist traditions. If the world can address problems of violence through a police model instead of a conventional military model, there may be a role for Christians from all traditions. In this volume, Schlabach presents his theory and has invited a number of scholars representing Catholic, Mennonite, and other traditions to respond to the theory and address a number of key questions:

This important volume offers a fresh and meaningful discussion to help Christians of all traditions navigate the difficult questions of how to live in these times of violence and war.