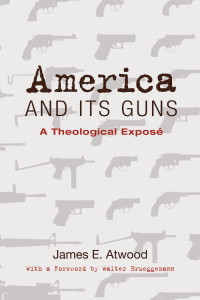 America possesses 300 million guns and witnesses over 30,000 deaths every year from gun violence. In America and Its Guns, James E. Atwood, an avid hunter and NRA member, issues a theological, political, and practical call for people of faith to work to change the prevalent gun culture in America and fight for stronger gun laws.

Atwood confesses that during his early years of activism, he misplaced his hopes and energies in the power of national and state legislatures to regulate guns while still respecting gun rights. Laws will not change, he believes, until people of faith realize how the “Gun Empire” has convinced America that only violence will achieve our security. Recognizing the inability of the political powers to adequately address the problem, he realized that gun violence was as much a spiritual issue as a political one. Understanding gun violence as a spiritual issue allows us to see that our trust in guns is nothing less than idolatry, he confesses. “Instruments which bring only death [are] incapable of providing peace” (204).

Atwood concludes his book with fifteen concrete and specific actions that church communities can take to attempt to reduce gun violence. While the “Gun Empire” deceives us into thinking we must secure our own peace through guns, the day is coming, Atwood hopes, “when all the nations will testify that security and peace are God’s gifts, and are not really ends in themselves, but rather by-products of living in just and loving relationships with God and neighbors” (204).