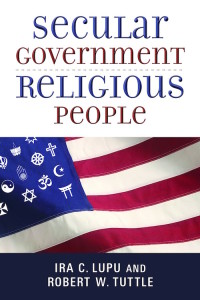 Ira C. Lupu and Robert W. Tuttle’s most recent book, Secular Government, Religious People, examines the relationship of the government to its pluralistically religious citizens. However, despite its broad title, this work by two law professors examines this relationship specifically through the lens of the Nonestablishment principle of the First Amendment. Nonestablishment is usually understood as a balancing of rival rights: freedom of religious practice versus freedom from religious coercion. But Lupu and Tuttle suggest an alternate understanding: Nonestablishment as a principle that defines the secular character of the government. Understanding the government as a secular institution, they argue, does not imply hostility toward religion; rather, it demonstrates that government receives its authority from the people, and not a revealed or transcendent source. The rights talk that has dominated Establishment Clause debates and litigation leads only to irreconcilable claims and, more significantly, neglects the distinctive connection between secular government and religious people.

For Lupu and Tuttle, rather, Nonestablishment “turns on the idea that religion constitutes a jurisdictional limit on civil government” when it comes to religious matters (5). Nonestablishment defines the government’s relationship to religion in three ways: the placement of governmental authority in its citizenry, a limit to the state’s authority in religious matters (i.e. the government cannot adjudicate ecclesial questions), and a prohibition on demanding the worship and reverence of its citizens (27-29).

It is important to note that Lupu and Tuttle’s book is a legal work and not a theological text. Therefore, it misses theological concerns about the comprehensive pretensions of even a secular authority, and will not allay the worries of all theologically-inclined readers. For many non-legal readers, their argument may seem esoteric. What is at stake in understanding Nonestablishment as a jurisdictional limit as opposed to a balancing of rights claims? Still, even for theological readers, the book and its argument offer important concrete considerations with deep implications for religious thought and practice. A thought experiment illuminates their point. For the authors, even a small, one-room public schoolhouse in a religiously homogenous community in which every student and parent agreed on the wording and propriety of a daily prayer, eliminating any claims that one’s religious rights have been infringed upon positively or negatively, would still violate the Establishment Clause because permitting such an act is simply not within the nature of a secular government (122). The Establishment Clause limits the government against aligning itself with divine authority as such a prayer would do. In the end, Nonestablishment is not about the rights of citizens, but about the character and purpose of government itself. They claim, “Government should remain free to acknowledge the religiosity of its people without claiming religious authority for itself” (156).

To make their case for this alternative reading of the principle, and to critique occasions when legal action has departed from this vision, Lupu and Tuttle investigate a plethora of Supreme Court cases dealing with all aspects of the issues involved: disputes over church property, employment rights, school prayer, federal funding of faith-based social programs, and military chaplaincy. Their treatment of each of these issues illumines the significance of their claim and identifies the broader implications of a richer understanding of the relationship of government and religion.