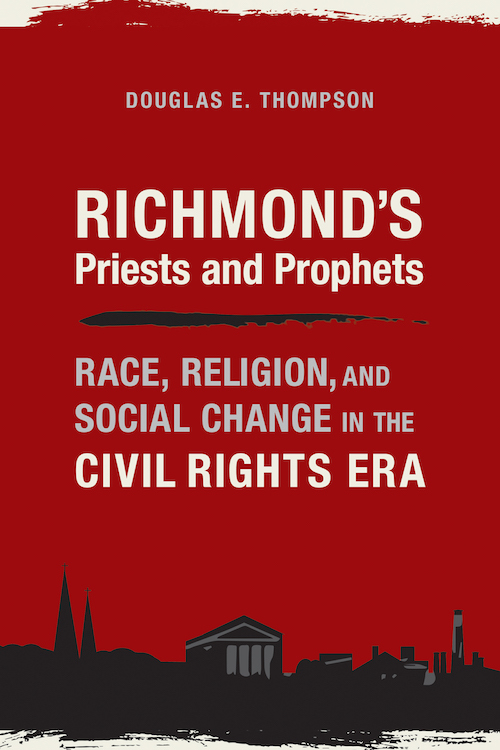 Richmond’s Priests and Prophets examines Richmond, Virginia, during the 1940s and 1950s, exploring the ways in which white Christian leaders navigated the shifting legal and political battles around desegregation even as members of their congregations struggled with their own understanding of a segregated society.

Douglas E. Thompson’s Richmond’s Priests and Prophets: Race, Religion, and Social Change in the Civil Rights Era presents a compelling study of religious leaders’ impact on the political progression of Richmond, Virginia, during the time of desegregation. Scrutinizing this city as an entry point into white Christians’ struggles with segregation during the 1950s, Thompson analyzes the internal tensions between ministers, the members of their churches, and an evolving world.

In the mid-twentieth-century American South, white Christians were challenged repeatedly by new ideas and social criteria. Neighborhood demographics were shifting, public schools were beginning to integrate, and ministers’ influence was expanding. Although many pastors supported the transition into desegregated society, the social pressure to keep life divided along racial lines placed Richmond’s ministers on a collision course with forces inside their own congregations. Thompson reveals that, to navigate the ideals of Christianity within a complex historical setting, white religious leaders adopted priestly and prophetic roles.

Moreover, the author argues that, until now, the historiography has not viewed white Christian churches with the nuance necessary to understand their diverse reactions to desegregation. His approach reveals the ways in which desegregationists attempted to change their communities’ minds, while also demonstrating why change came so slowly—highlighting the deeply emotional and intellectual dilemma of many southerners whose worldview was fundamentally structured by race and class hierarchies.