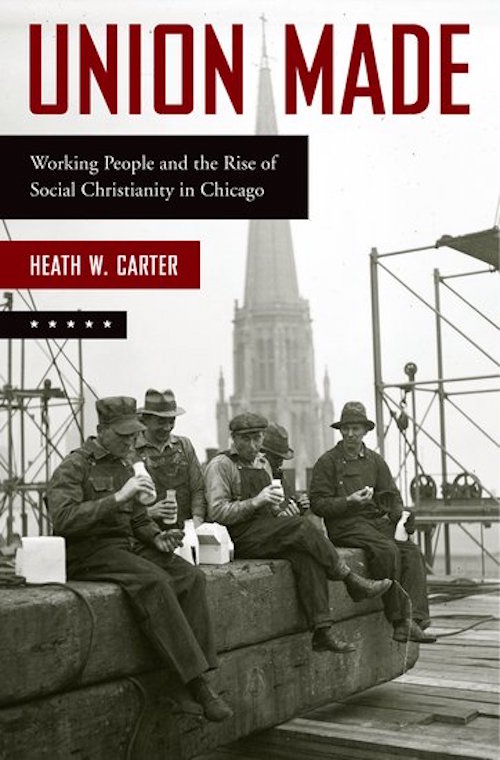 In Gilded Age America, rampant inequality gave rise to a new form of Christianity, one that sought to ease the sufferings of the poor not simply by saving their souls, but by transforming society. In Union Made, Heath W. Carter advances a bold new interpretation of the origins of American Social Christianity. While historians have often attributed the rise of the Social Gospel to middle-class ministers, seminary professors, and social reformers, this book places working people at the very center of the story. The major characters–blacksmiths, glove makers, teamsters, printers, and the like–have been mostly forgotten, but as Carter convincingly argues, their collective contribution to American Social Christianity was no less significant than that of Walter Rauschenbusch or Jane Addams.

Leading readers into the thick of late-19th-century Chicago’s tumultuous history, Carter shows that countless working-class believers participated in the heated debates over the implications of Christianity for industrializing society, often with as much fervor as they did in other contests over wages and the length of the workday. The city’s trade unionists, socialists, and anarchists advanced theological critiques of laissez faire capitalism and protested “scab ministers” who cozied up to the business elite. Their criticisms compounded church leaders’ anxieties about losing the poor, such that by the turn-of-the-century many leading Christians were arguing that the only way to salvage hopes of a Christian America was for the churches to soften their position on “the labor question.” As denomination after denomination did just that, it became apparent that the Social Gospel was, indeed, ascendant–from below.

At a time when the fate of the labor movement and rising economic inequality are once more pressing social concerns, Union Made opens the door for a new way forward–by changing the way we think about the past.