Virginia Seminar Projects: A Very Brief History of Eternity and Learning to Die in Miami: Confessions of a Refugee Boy

Carlos M. N. Eire is the T. Lawrason Riggs Professor of History and Religious Studies at Yale University. For the Virginia Seminar, Eire wrote two books. A Very Brief History of Eternity (Princeton, 2009) discusses how conceptions of forever, or eternity, have evolved through time in Western culture. His second memoir, Learning to Die in Miami: Confessions of a Refugee Boy (Free Press, 2010), begins where Waiting for Snow in Havana ends, and tells the story of his life as a refugee in the United States. Read an excerpt from the book.

Learning to Die in Miami: Confessions of a Refugee Boy 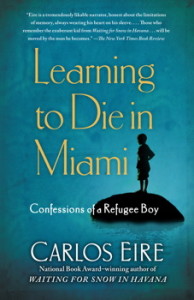 A Very Brief History of Eternity

Waiting for Snow in Havana 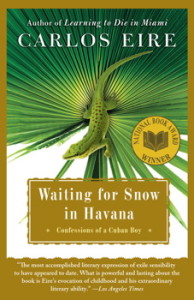 From Madrid to Purgatory: The Art and Craft of Dying in Sixteenth-Century Spain War Against the Idols

Carlos M. N. Eire is the T. Lawrason Riggs Professor of History and Religious Studies at Yale University. Before joining the Yale faculty in 1996, he taught at St. John’s University and the University of Virginia, and resided for two years at the Institute for Advanced Study in Princeton. His acclaimed books include War Against the Idols (Cambridge, 1986), From Madrid to Purgatory (Cambridge, 1995), and Reformations: Early Modern Europe 1400-1700 (Yale University Press, forthcoming). He is also co-author of Jews, Christians, Muslims: An Introduction to Monotheistic Religions (Prentice Hall, 1997). His memoir of the Cuban Revolution, Waiting for Snow in Havana (Free Press, 2003), which won the National Book Award for non-fiction in 2003, is being translated into Dutch, Finnish, German, Czech, Polish, Turkish, Portuguese, and Spanish.