My 5’1” person was punted directly into the development worker’s nightmare. While planning for a community event in the Oak Park neighborhood, a fellow worker approached me and innocuously asked why I was helping out. Like a freshly painted old record player I espoused a worn out answer with a bright smile, “Why, to help foster relationships and community engagement!” expecting him to drop it.

“…Well it sounds nice and all”

Visceral anger overtook my thoughts:I am NOT trying to just “feel good” (cue dramatic air quotes). I read the pop-Christian developer’s-bible, When Helping Hurts like three years ago. I’m way too enlightened for that kind of crap! Who does he think I am?!

Next came the judgment: Why would he presume I find so much self-worth in this project?! Who does he think he is?!

Finally came the developer’s dejection: Oh god. Am I really a colonizer? Should I even be here? People have been hurt enough without me.

After reimagining the conversation about 78 times, and after reading Bryant Myers’ book Walking With the Poor (because that is how I deal with these types of things: by reading 300-page books), I realized that my anger, judgement, and tail-between-legs guilt were merely unproductive defense mechanisms that kept my brother in Christ at arms length. In More than Equals, Perkins points to the proclamation of 1 Corinthians 13:7 that love always perseveres. I cannot back away from a brother or sister when they disappoint me or when they reveal their pent up bitterness. Instead I need to learn empathy for those who have been hurt by temporary do-gooder imports. I need to foster, “a commitment to understanding them on their own terms” (Myers 182).

It is the unfortunate reality that my missionary and development worker predecessors and I have earned suspicion and distrust. We must begin to see and understand this with tenderness–not paternalistic pity, but tenderness. I too would be wary of any asymmetrical power imbalance not in my favor. For the first time, I recognized my whiteness working against me, and I was pigeon-holed as untrustworthy because of my color. (Gee, I wonder what it would be like to live every day in that unjust reality). Even though I believed I was in the right, I had the obligation to genuinely ask God again to “search me and know my heart” (Psalm 139:23). The purity of motivations ebb and flow; it is wise to daily acknowledge that and daily repent. Colonizers, California-Spanish missions, and many normal churches today who ship their members off for a week to Kenya all have convinced themselves of their pure motivations. Even so, their work tragically damages people groups by committing murder, inflicting deep psychological damage, and enslaving–overtly with chains and covertly in fostering unhealthy economic and social dependance. We must become thoughtful, holistically educated, developmental practitioners so that our work is ultimately sustainable, empowering, and life-giving.

The past months of planning Oak Park Community Builders camp have been as tedious, unfamiliar, and frightening as playing a game of Risk with competitive relatives. “What are your goals?” pastor Dan asked me.

That everyone stays alive.

Camp began this week as any typical chaotic whirlwind does. This included but was not limited to some injuries, a diagnosis of lice, and a mild occurrence of projectile vomiting. Monday, we worked the community garden and learned about the garden-to-table movement. Tuesday, we focused on maintaining/improving literacy at the public library. Wednesday, we went to an A’s game to encourage pride in the city of Oakland (…and because I really wanted to go to an A’s game). Friday, at the end of a long week, we had a healthy living cooking class. 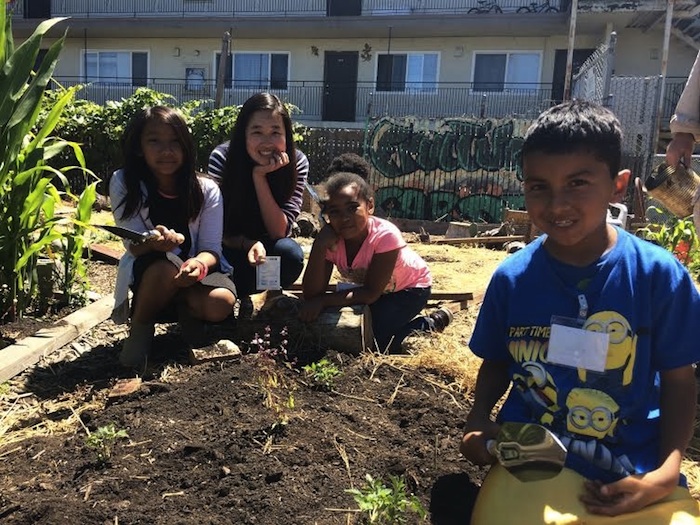 Planting tomatoes in our community plot 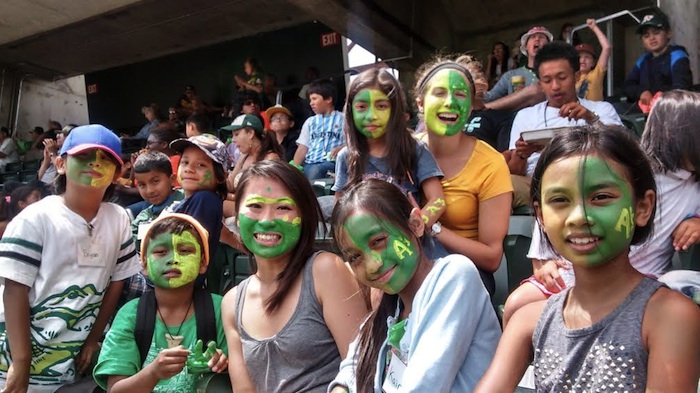 Solidarity was formed due to many unsuccessful attempts of washing off the paint.The residual yellow/green hue suggested a plague of jaundice had stricken our camp. 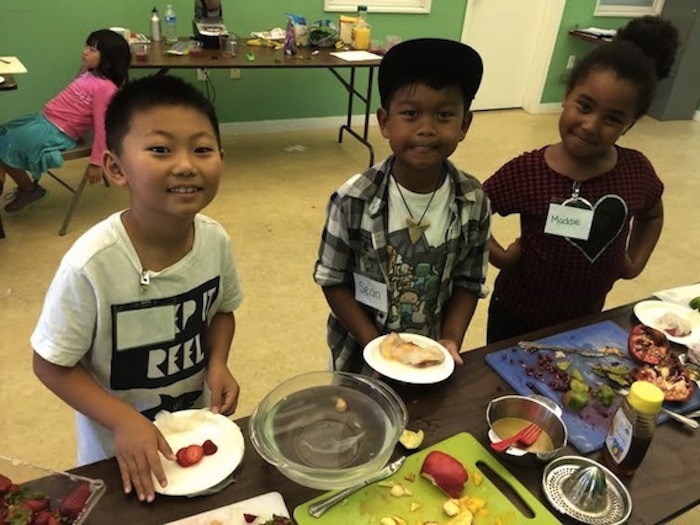 As Christians have matured in developmental theology, most find ourselves served by those we intended to serve. We have seen over and over that genuine development is relational development where “everyone is poor in God’s world and everyone is in need of transformation” (Myers 17). I can cognitively ascent to that idea, and reading it can even make my heart beat a little faster. However, in the midst of camp chaos I forget that profound truth and instead begin dreaming of how tantalizing fetal position seems at that moment. Like the opening anecdote to this blog showed, becoming frustrated, emotionally withdrawing, and becoming an army commander is an easy fallback where I assume total control. The problem with total control is that it leaves no room for God’s work of grace and reconciliation; I’ve taken it upon myself to solve the problem in my own familiar way. In the midst of camp chaos and interpersonal discord it is hard to re-imagine both me, the children, and the community worker as broken vessels coming together, listening to and learning from the gifts of the other, and moving towards an understanding of what it means to be reconciled as sister and brother. Only when I have slowed down and begun to build relationships of love and honesty has trust been born. Only within those patient self-giving relationships of trust have I begun to receive healing I didn’t even know I needed from these tiny, 6-10 year old, unassuming wells of life.

I, an outsider, a despised foreigner to some, have been shown the hospitality and saving grace of these little Good Samaritans.