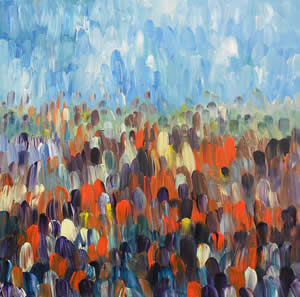 “During the night Pharaoh summoned Moses and Aaron and said, “Up! Leave my people, you and the Israelites!…The Egyptians urged the people to hurry and leave the country. “For otherwise,” they said, “we will all die!” So the people took their dough before the yeast was added, and carried it on their shoulders in kneading troughs wrapped in clothing….. The dough was without yeast because they had been driven out of Egypt and did not have time to prepare food for themselves” (Exodus 12:31-37).

“I was making dinner for my children. I had one child strapped to my back, and one in my stomach. It was then men from Burmese government came. They broke into my house and asked me where my husband was. They wanted to take him for forced labor, to carry their equipment. I would never see him again. I said I didn’t know where he was. They put a gun to my head in front of my children and asked me where he was again. I said I didn’t know where he was. They let me live. I was very lucky. I took my kids and my husband and wrapped up my food… it wasn’t fully cooked because we had to run. We ran for 4 days to the refugee camp on the Thai/Burmese border. They burned down my house when I left. We stayed there for 9 years before leaving for America. This happens to my people every day” (Mrs. Q, a Karen Refugee).

As Mrs. Q spoke in her native tongue, her words were gently translated to the room. All of us who were gathered—including three other Karen refugees who I was interviewing, and me–fell silent. As her story unfolded, the atmosphere in the office palpably changed. The air felt thick, sorrowful, and sacred. We sat under a holy mist, consecrated by her story, in solidarity with our sister who had experienced too much.

The Karen people are a minority comprising 7% of the total Burmese population. They have been persecuted by the government for their religious (Christian), ethnic, and resulting political status. A 2005 New York Times report by Guy Horton reported, “documented slave labor, systematic rape, the conscription of child soldiers, massacres and the deliberate destruction of villages, food sources and medical service[1]”. BBC has estimated that up to 200,000 Karen have been driven from their homes since the 1950’s, with 160,000 living in refugee camps. The other 40,000 have been resettled to various locations including, of all places, Oakland, California.

It is no surprise that Mrs. Q parallels her experience to the Israelites who God liberated, leading them away from a corrupt political tyrant in Egypt and (…400 years later) into their promised land. She knowingly laughed as she told us that she too was forced to take her half-cooked food on the run. God is the same faithful God even now. As Mrs. Q was honoring us by sharing her story, her love for God was visibly overflowing in her narrative, yet the lines etched on her face and the sadness that occasionally graced her eyes spoke another story and forced me to wonder about questions that she may too have wrestled with:

What about the people who were not as lucky as Mrs. Q?

…Did God’s saving grace not apply to them?

For those still in Burma, who have been internally displaced, who are now foreigners in an alien land, or in a refugee camp, what does liberation look like?

What could I even possibly do about it?

My adrenals are activated knowing how easily these questions can snowball into an existential crisis reminiscent of my first year at university when I found out the Israelites may not have actually crossed the Red Sea.

What does this mean? For them? For me? For the nature of God?

Elsa Tamez, a Latin American liberationist theologian, is all too familiar with these questions and writes in The Bible of the Oppressed, “The Bible does not hesitate to speak of oppression as an action directed against Yahweh Himself” (38). For Tamez, the entire biblical narrative must be read in light of God liberating God’s people from oppression. It should not merely be another easily overlooked theme. From the freeing of the slaves in Egypt to Jesus saving the adulterous woman from death by the religious leaders, God has continually shown God’s hatred of oppression. At every moment in history God has been in solidarity with the oppressed so that they may be assured that love and liberation will be realized.

For Tamez, God of Abraham is not an unfeeling deity that floats around in the sky, that plays with the life of humans like the pantheon of Greek Gods. While I hesitate to quote C.S. Lewis (as I am afraid it may induce an eye roll from a number of academics and disillusioned Protestants), Lewis brings Tamez’s quote to life through an image of God’s grief in light of injustice in The Magician’s Nephew.

“‘But please, please – won’t you – can’t you give me something that will cure Mother?’

Up till then he had been looking at the Lion’s great feet and the huge claws on them; now, in his despair, he looked up at its face. What he saw surprised him as much as anything in his whole life. For the tawny face was bent down near his own and (wonder of wonders) great shining tears stood in the Lion’s eyes. They were such big, bright tears compared with Digory’s own that for a moment he felt as if the Lion must really be sorrier about his Mother than he was himself.

What if, in an ineffable cosmic algorithm, God is somehow bound?

What if, instead of being sidetracked by passionate anger at God for a perceived lack of saving grace, we put that same passion into enacting Jesus’ call? God is waiting for us to express our faith in God through a public display of love; love which looks like working towards justice for our neighbor.

What would a world look like if we were more like Mrs. Q and truly believed that we are mandated to be the hands and feet of Christ through the Holy Spirit; coupled with the constant hope that Yahweh will do what Yahweh has always done in the biblical narrative, which is to bring justice to the oppressors and liberation to the oppressed?

“Love and truth will meet; justice and peace will kiss each other. Truth will spring up from the ground and justice will look down from the sky. Yea, the Lord will give what is good, and our land will yield its increase. Justice will go before him, and make his footsteps a way” (Psalm 85:11-13).