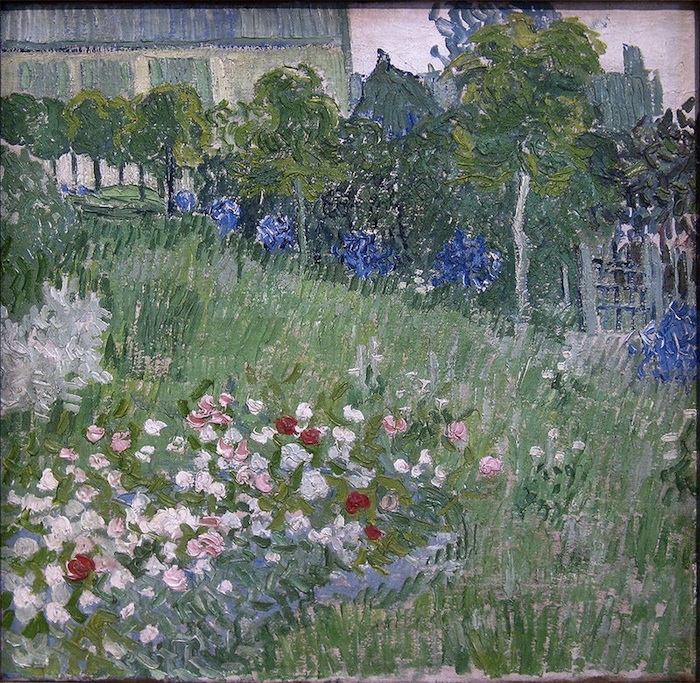 As Van Gogh was battling mental illness he was encouraged to spend time in this garden outside his hospital. While painting it, he began to find a path to peace.

Of this diseased world

That has so long been in sickness:

That breath proclaims that a saving remedy

Has been sent to heal our mortality

When I first arrived in Oakland, my eyes, void of the grace to see urban beauty, rested only on the unfamiliar, aesthetically unpleasing sites. I saw only dilapidated warehouses menace the streets and looming oil-rigs menace the shore. I watched the elderly trip on uneven pavement, counted how many gun shots I heard at night (12 consecutive was the record), was accosted with the smell of rotting trash on the streets, and once quite literally almost ran into a prostitute as I walked out of church.

To me the phrase “urban jungle” became a euphemism for “concrete warlord.”

I realized I had become one of the Jews who asked in disgust, “can anything good come from Nazareth?!” not believing the savior of the world could come from a place so repugnant (John 1:46). It was Pastor Dan of New Hope church that showed me how to see the beauty. He told me of his youth outreach ministry making “flower bombs,” balls of compost and seeds and throwing them into random dirt patches. The seeds that took, took; those that didn’t, didn’t; and that was fine. I began to walk down the streets and see flowers growing in unused public spaces, plots of land, and even little cracks in the pavement. The Unstoppable Green Thumb’s promise of redemption was faithfully breaking free from the concrete warlord.

Ex-gang members founded the Fruitvale Community Garden as a result of gang injunction by the city of Oakland. “Can anything good come of those who have belonged to a gang?!” asked Oakland officials. Apparently so! This urban garden was founded as a living protest that brought about beauty, toil, friendship, art, sweat, and a full stomach. The ex-gang members did not know they were doing the work of the First Gardener by this act of creation. Vigen Guroian writes in Inheriting Paradise: Meditations on Gardening that gardeners are nearer to understanding and obtaining godliness than theologians are.

This little gem hides off Foothill Avenue. It is enclosed by a chain-linked fence, on which if you tilt your head just so, you can see the faint graffiti tags where gangs have marked their territory. Walk into the garden and you enter a place that is neither fully garden nor fully city. Look down and watch worms busily crawling out of fresh compost, look up and see the old apartment complex’s tower above the joyful sunflowers, listen and hear sirens whir, inhale that lovely stench of fresh compost wafting in the gentle breeze, gather figs that fell from the orchard in the far left corner, and taste the bok choy an elderly Asian lady kindly forces into your hand (this, fortunately, happened to me).

A commonality between all gardens is that none are perfect, nor are all gardens beautiful in everyone’s eyes. Imperfections, like pests for instance, act as Babylonian gods who gorge themselves on the ripe produce grown from the sweat of laborers. As the children and myself gardened in the harsh noonday sun, we temporarily felt the burden of Adam’s curse. Recently, drunken people have been loitering in our urban garden late at night. After a long debate among the gardening collective (also referred to as the “anarchists”), it was decided with much sorrow to place a lock on the fence with a number available for those who wanted to join. The drunken loiterers had sinned, fallen short of the glory of the garden, and were cast out. But they need only knock (or call in this scenario) and repent of their destructive ways to be let back in with open arms. Gardens have not been perfect since Adam and Eve were cast from the garden, yet they all live with the remembrance of Paradise: “The Christian who gardens knows that on Easter the curse and the prohibition imposed upon the first couple have truly been removed” (Guroian 38).

On our first day in the garden I taught a lesson on the creation of the earth, when God said,

“Let us make humankind in our image, according to our likeness; and let them have dominion over the fish of the sea, and over the birds of the air, and over the cattle, and over all the wild animals of the earth, and over every creeping thing that creeps upon the earth.”

What does it mean to have dominion? I hoped to help them understand that they are inextricably bound to the garden, the earth. I hoped to teach the children not merely how to garden or to spout off hip things about the garden-to-table movement. I wanted them to garden, and while they were gardening I hoped they might grab a clump of dirt and realize that they were made from the same stuff. I hoped they would plant bean seeds and that I would watch their eyes widen in awe as their seedlings miraculously grew larger each day. I hoped they would rejoice in watering the garden like the angels celebrate when sin is washed away in the blessed water of baptism. I wanted them to see themselves as “apprentice[s] of the good Gardener of creation” (Guroian 61).

The last day of gardening, the kids hung little bird houses on which they painted a fruit of the spirit. These fruits, they learned (in more elementary terms), “ blossom in the garden of our lives when we open our hearts to the Spirit of God” (Guroian 42). Along with their houses they placed their painted bricks around our plot of tomatoes. This final act of enclosing their garden with their artwork symbolized their responsibility for the earth, or at least for their little garden plot.

Through my time in the urban garden I remembered that we are ordained to work for Creation’s ultimate flourishing.

We belong to the earth and our redemption from which we and all creatures have come, by which we are sustained, and through which God continues to act for our salvation. If the water is the blood of creation , then the earth is its flesh, and the air is its breath, and all things are purified by the fiery love of God (Guroian 12). 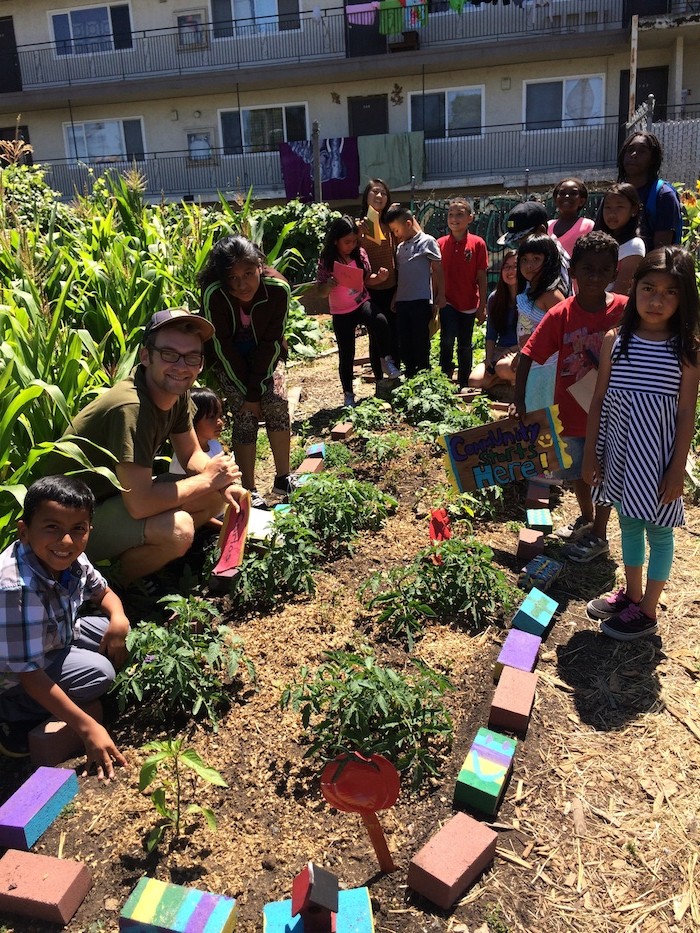 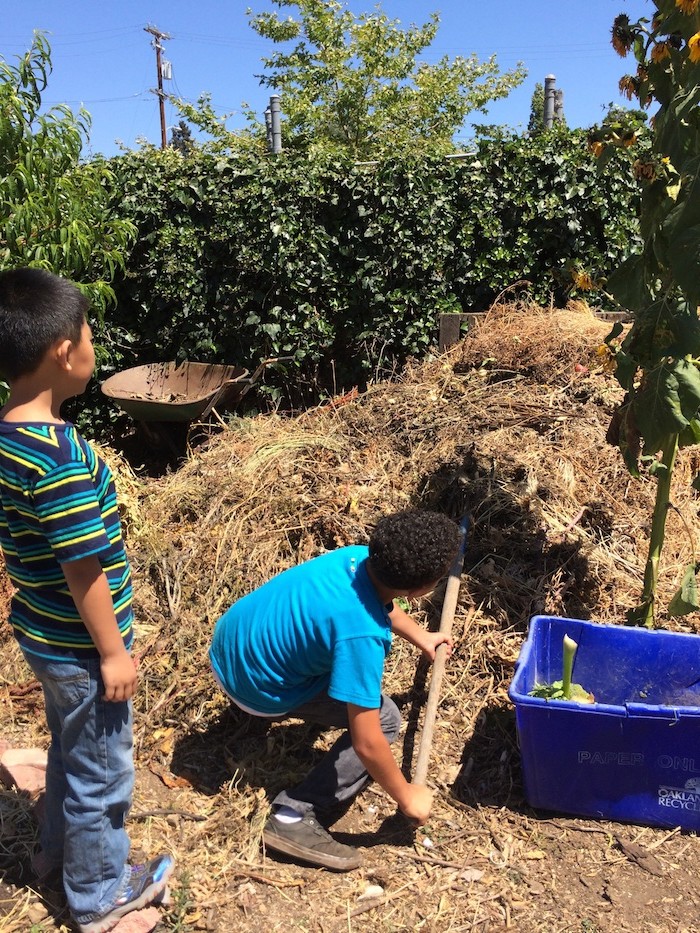