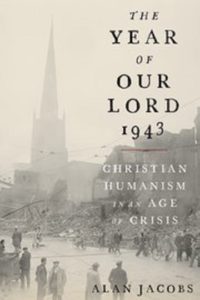 Christian Humanism in an Age of Crisis

In The Year of Our Lord 1943, Alan Jacobs explores the poems, novels, essays, reviews, and lectures of five Christian intellectuals who wrote about what the world would look like after World War 2. It had become a common thought among Christian intellectuals that the Allies were not culturally or morally prepared for their success, and a war won by technological superiority merely laid the groundwork for a post-war society governed by technocrats. Jacques Maritain, T. S. Eliot, C. S. Lewis, W. H. Auden, and Simone Weil, sought both to articulate a sober and reflective critique of their own culture and to outline a plan for the moral and spiritual regeneration of their countries in the post-war world. Jacobs has now brought all of these writings into one coherent narrative, as each person presents their views of the very different paths now set before the Western democracies.

Although all five thinkers worked separately, they developed a strikingly consistent argument that the only means by which democratic societies could be prepared for their world-wide economic and political dominance was through a renewal of education that was grounded in a Christian understanding of the power and limitations of human beings. In this book, Jacobs masterfully shows why they all thought it vital to restore Christianity to a leading role in the renewal of the Western democracies.

“Alan Jacob’s prose wears immense learning lightly, with great grace and to great effect. To think alongside these writers, under Jacobs’s stage direction, to hear them across a gap of three-quarters of a century think with gravity and sincerity, pondering the nature of the human soul, palpably straining toward the ideal of the common good, feeling the pull of their religion’s perennial pitfalls, in a situation and language different from and yet not wholly unlike our own, is riveting, challenging, and life-giving.”—Lori Branch, author of Rituals of Spontaneity

“Alan Jacobs has written an elegant and deeply learned book on Christian humanism in the critical years of the Second World War. He opens a window into some of the most luminous and profound thinking about the nature and possibilities of civilization during those troubled years. By doing so, has opened a window for thinking about our own troubled times.”—James D. Hunter, author of To Change the World: The Irony, Tragedy, and Possibility of Christianity in the Late Modern World

“Jacobs seems to have written this with an eye to the time between the collapse of the Soviet Union in the 1990s and the events of 9/11, when it seemed that democracy had finally achieved peace, only to find it widely rejected. His look at how these five figures struggled with similar turns of events is worth pondering.” —Library Journal

Alan Jacobs is a distinguished professor of the humanities in the honors program at Baylor University. His work revolves around multiple interests, primarily literature, theology and technology.