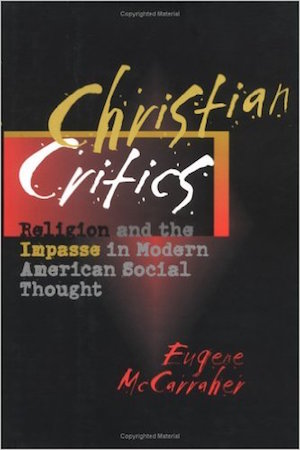 Over the course of the twentieth century, liberal Christian intellectuals—both Protestant and Catholic—created a body of theological reflection on the rise and triumph of corporate capitalism. Unlike their secular counterparts on the left, they drew on religion to make sense of the emerging world of professional expertise, industrial technology, and therapeutic selfhood. Christian Critics explores their social thought and cultural criticism and examines the sometimes unexpected ways that these Christian leaders perceived the nation and its people.

Offering portraits of a diverse selection of critics—including Walter Rauschenbusch, Reinhold Niebuhr, H. Richard Niebuhr, Dorothy Day, Paul Tillich, Thomas Merton, Martin Luther King Jr., Daniel Berrigan, Michael Novak, Mary Daly, and Garry Wills—Eugene McCarraher argues that together they left a contradictory legacy. While all supported movements for the rights of labor, racial minorities, and women, some endorsed the military-industrial order that established the professional-managerial class as a dominant national force, while others favored a decentralized political economy of worker self-management. At the same time, McCarraher recasts the debate over the “therapeutic ethic” by tracing a shift, not from religion to therapy, but from religious to secular conceptions of selfhood. His book returns theology to its crucial place in the history of twentieth-century American intellectual life and suggests its importance to the future of the American Left.