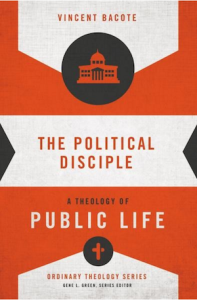 Can Christians live lives of faithfulness while also involved in the political arena? Can there be Christian faithfulness in the public realm? These are the questions Vincent Bacote addresses in his new book, The Political Disciple. This short volume, written as a primer for pastors and lay people alike, considers Christian ambivalence about political engagement and supplies a theological argument for Christian involvement in the political sphere.

Bacote writes this book for Christians tempted to leave the public square and find alternative models of faithfulness. He argues that, instead, Christians honor God best by “remaining faithful to the task of public engagement” and suggests that we accept our mandated public responsibility. Involvement in politics is simply part of the larger question of Christian participation in secular culture generally. And here, Bacote appeals to Abraham Kuyper’s concept of common grace, the idea that God’s grace and affirmation that the created world is “good” compels Christians to bring God glory through participation in the world, by serving God “in every position in life.” Bacote bases this conclusion in a reading of Genesis 1:26-28: humans are created in God’s image, and part of demonstrating that image is in the mandate to rule over creation (best understood as stewardship for creation, according to Bacote). This is the “original Great Commission” and means that we have a responsibility for creation that necessitates public engagement in culture, society, and politics.

For Bacote, this public responsibility requires the pursuit of holiness in and through our engagement in public concerns, like politics. The Christian doctrine of sanctification has implications for our politics—primarily that we treat political opponents as neighbors, that we “love our enemies even when we ‘stand for truth’” (69). In this light, Bacote concludes with three suggestions about our public posture. First, we ought to reclaim the practice of lament in the face of frustrations with our public responsibility. Second, he calls for us to temper our expectations with a posture that recognizes that politics is not the answer. While we hope our actions make a difference, we know we cannot manage the direction of society, nor are we supposed to. And third, we acknowledge that suffering may accompany our public responsibility.

Christians are indeed aliens and pilgrims in this world, and primarily citizens of heaven. But our witness to this “otherness” requires public action. “Though Christians have a greater allegiance to God than to any earthly nation or political figure it is proper Christian practice to be a good citizen” (51). We are “kingdom citizens” who are committed to the good of all earthly nations.