Consultant for Virginia Seminar Class of 2014

Susan R. Holman is senior writer at the Global Health Education and Learning Incubator at Harvard University. She is an academic writer, editor, occasional guest speaker and lecturer, and sometimes-mentor in religion, early Christianity, and social justice issues. Holman is the author of Beholden: Religion, Global Health, and Human Rights and the creator and curator of two websites, Jottings and Poverty Studies, both intended to encourage ecumenical and cross-disciplinary dialogue between the academic study of religion and contemporary community service. Read more about her academic work and view her CV. 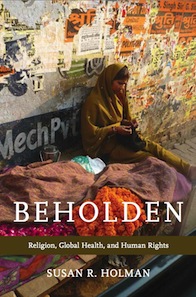 On Fasting and Feasts: St. Basil the Great
Co-authored/translated with Mark Del Cogliano Wealth and Poverty in Early Church and Society
Editor The Hungry are Dying: Beggars and Bishops in Roman Cappadocia “Religion and Global Health: An Interview with Dr. Susan Holman” in Harvard University’s Initiative on Health, Religion and Spirituality, June, 2015.

Susan R. Holman grew up in New England, where both her grandfather (a farmer) and great-grandfather (a doctor) were “overseers of the poor” for their villages. She opted early in life to pursue a more bookish and urban career, first in public health nutrition and then yielding to a lifelong interest in religious studies. After studying at Harvard Divinity School learning Greek and the context of early Christianity and culture, she completed doctoral research at Brown University, with a dissertation on early Christian sermons on poverty, disease and hunger. She is author of Essentials of Nutrition for the Health Professions (JB Lippincott, 1987), The Hungry are Dying: Beggars and Bishops in Roman Cappadocia (Oxford University Press, 2001), Basil of Caesarea: On Fasting and Feasts (St. Vladimir’s Seminary Press, 2013), and editor of Wealth and Poverty in Early Church and Society (BakerAcademic, 2008).

Holman’s book project with the Virginia Seminar in Lived Theology, God Knows There’s Need: Christian Responses to Poverty, which was supported by both the Project on Lived Theology and a 2007-2008 Christian Faith and Life Grant from the Louisville Institute, was published by Oxford University Press. Click here and here to read excerpts, and here to read an interview. She is now working on a new book (also under contract with Oxford) tentatively titled Just Believing; the book will explore a few of the connections and tensions between global health, human rights and faith-based approaches to poverty.

Holman is an academic writer, editor, occasional guest speaker and lecturer, and sometimes-mentor in religion, early Christianity and social justice issues. She is currently senior writer at the Harvard Global Health Institute. She has worked as a research writer at Harvard University’s François-Xavier Bagnoud Center for Health and Human Rights at Harvard School of Public Health, as managing editor for Health and Human Rights: An International Journal (for which Dr. Paul Farmer is editor-in-chief), and as an independent scholar and consultant in poverty studies in religious history as well as in health and human rights as it relates to international poverty, religion and nutrition. She created a non-profit, free, open-access website to encourage ecumenical and cross-disciplinary dialogue between the academic study of religion and contemporary community service–www.povertystudies.org – and also keeps an occasional blog.

Read “Centuries of Need,” an article about Holman’s academic work on Christian responses to poverty in the Spring 2010 issue of Tufts Nutrition.

Favorite books: A few old or recent favorites I would pick up for sheer pleasure and re-read every few years include: authors Adina Hoffman (Sacred Trash and House of Windows) and Chaim Potok (all his books); Charles Williams’ Place of the Lion; Beryl Markham’s West with the Night (really written by Raoul Schumacher); Flannery O’Connor’s letters (Habit of Being); Hilda van Stockum’s The Winged Watchman (my favorite book from childhood); Augustine’s Confessions; Sertillanges’ The Intellectual Life; Edmund de Waal’s The Hare with Amber Eyes; and Olga Lossky’s recent biography of Elisabeth Behr Sigel, Toward the Endless Day.

Also on my top favorites list are two of Edith Pargeter’s trilogies that are magnificently beautiful and haunting but too painful to read very often: one on World War II (Reluctant Odyssey, The Eighth Champion of Christendom, and Warfare Accomplished) and one on the construction of a medieval cathedral (the Heaven Tree trilogy).

As friends who have seen my bookshelves will know, the list could go on and on.

Admired authors: For their lives and work: the Romanian priest Dumitru Staniloae; the physician-anthropologist Paul E. Farmer; the historical biographer Edith Pargeter (whose own life story remains an intriguing mystery); and, holding the world together for me undergirding how I read them all, those who originally took inky instrument to writing surface to give us the biblical texts and stories about them.

Writing influence: My writing is most influenced by the perpetual paradox of silences in the city.

Writing quirk: I am most at home writing in longhand on pads of narrow-ruled yellow paper. I write slowly and revise fanatically. Once every ten years or so, I write a poem.