On my first day in a new city, I got off the train and walked confidently out onto 4th street…in the wrong direction. I remembered from Apple Maps that my directions were very simple: just walk down 4th until I reach Ellis and make a left. That was all fine and good except that I wasn’t sure which way to walk on 4th. I pulled up the Maps directions again, but this time it told me to walk down 5th. I listened. (After driving all the way across the country to get here, I’ve realized that Maps is my friend).

When I reached 5th Street at Bryant I was almost stopped in my tracks by this image. 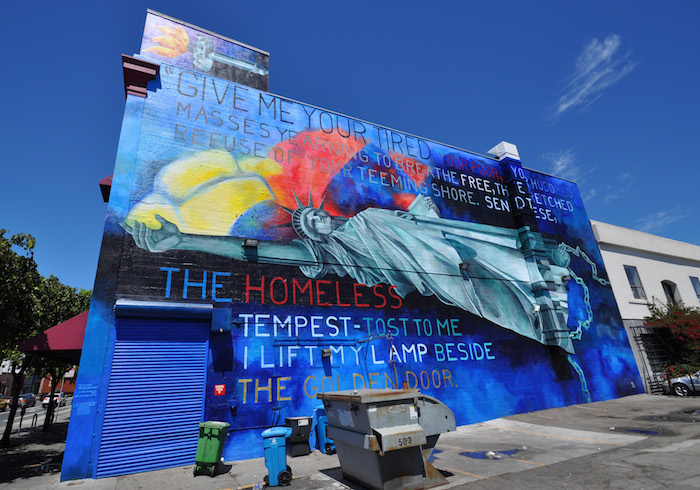 This is a famous mural entitled “To Cause to Remember” by Johanna Poethig. With its depiction of the Statue of Liberty, lying on her side, shackled and torch-less, symbolizing our nation’s “best unrealized intentions,” this mural is boldly political (Poethig). It struck me that this piece of public art is just overt enough to match the stark contrast between prosperity and poverty that my day was sure to hold.

When I woke up that morning I was lying in my comfortable bed in the Rapazzini household in Los Gatos, California, where I’m fortunate enough to be living for the summer. At the end of my two-hour commute, I would be in San Francisco’s Tenderloin neighborhood. As I moved between these two communities, the number of non-white residents increased by 45.5 percent, the median household income decreased by $99,040, and the number of homeless residents increased from nearly none to approximately 3,000. It’s a dramatic shift.

I anticipated this shift; I had been thinking about it for weeks. But it didn’t stop me from feeling a familiar onslaught of emotions at the sight of the first homeless person I saw. The first step is a kind of detached recognition. I’ve seen enough homeless people in my life (and almost daily on the Corner back in Charlottesville) to be able to walk past someone without thinking twice, but this is exactly what I’m working against. A few years ago, I asked someone I respect what his policy is on giving out money to homeless people. He responded by saying, “I can’t always help them, but I can always acknowledge their existence.” This is a motto I’ve taken to following. So the next step is forcing myself to look and see the man or women before me. Whether this involves actually making eye contact, or speaking with them, or just taking an internal pause to recognize that they are there, I try to do this regularly.

Although the organization I am working with this summer, Because Justice Matters, does not cater to an exclusively homeless population, I believe that this practice is transferrable to everything that I do. Because Justice Matters (BJM) is a non-profit Christian organization in the Tenderloin that exists to serve women who are victims of sexual exploitation and domestic violence, and offers support to those experiencing isolation due to economic and cultural challenges. As I engage with these women this summer, I am challenging myself to an extended version of the practice I just described. Every day, as I move from a place of comfort and affluence to a place of hardship and poverty, I will pause, and I will look. I will try to truly see the women and girls before me.

As I looked up at this mural I reminded myself that I was about to enter a world that is radically different from my own. It’s a hard thing, I’ve realized, to really know and understand people who come from such a profoundly different background. But I’m hoping that with a sustained effort and a lot of grace, God might help me truly see the women of the Tenderloin–as She sees them.

I looked back down at Maps and saw that I was on driving directions, not walking directions. Without this mistake I would have walked right past this mural just another street over. A fateful accident, to be sure.

At this point I’ve been living in the Bay Area and working in the Tenderloin for two very eventful weeks. Although many of the programs that BJM runs are on a break for the month of May and resume in June, I have had a number of opportunities to interact with women in the community.

On Tuesday mornings I attend a community group called Alpha that is comprised of women who live in the Tenderloin, including some of the BJM staff. This is a diverse group of women, ranging in age from 30 to nearly 80. They are black, Asian, Pacific Islander, and white. They come from different cultures, different educational backgrounds, and differing housing situations.

The meeting begins with a meal shared together, followed by a video that covers various tenants of the Christian faith, and then a discussion. Natt, a member of BJM’s staff, warned me beforehand that the video was made for teenagers, and therefore could be a little silly. However, she said, it is more engaging and easily digestible for people with limited formal education. True to her warning, the video was ready-made for white, suburban, evangelical youth groups. As the video played I couldn’t help but think, this must be so ridiculous to them. The hardest circumstance the average viewer of this video probably has to overcome is their mom saying they can’t go out with their friends until they finish their homework. I know these thoughts trivialize the lives of an entire population (which I used to belong to), but in the moment I was disappointed.

I’m not blaming BJM for choosing the video series; they are making do with what they can. But I do wonder, where are all of the teaching videos targeted towards women living in poverty? Where is the material catered towards women who have been affected by violence, exploitation, and mental illness?

I just finished reading Bible of the Oppressed, a book by Latin-American liberation theologian Elsa Tamez. In this exegetical work, Tamez uses the narratives of the Hebrew Bible to reveal that the God of Israel is the God of the oppressed, a God whose highest aim is justice and a God whose modern-day followers must pursue justice in their communities. Although the Bible has been used as a tool of oppression in many times and places, Tamez redefines it as a book that reveals Godself to God’s people – and God’s people are the exploited, the downtrodden, those considered “nothings” by society.

Unlike the Alpha videos, the Bible is, in fact, meant for the women that BJM serves. It contains a message of hope and grace that is intended for them. I can only hope that Alpha Group can guide them to this message.