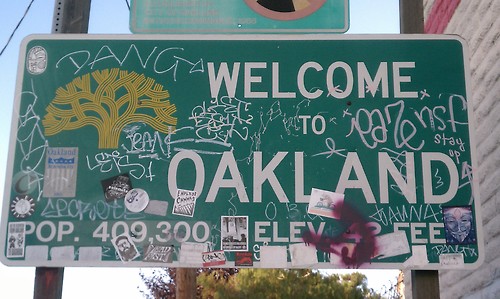 Prior to this week I was nervous to drive through the city of Oakland, California.

You know in life when over a short period of time your eyes become so opened you almost feel blind? The sheer quantity of exposure to newness is so overwhelming that you find yourself, yet again, oddly put in a box with the seemingly random assortment of Socrates[1], the Apostle Paul[2], Faust[3], and Kierkegaard[4] when they all said some variation of, Ah yes, I don’t know anything. What a frightening relief.

Well, I found myself in that weird Socratic-Apostolic-Literary-Existentialist box.

And I am relatively certain I’m going to be hanging there the rest of my summer.

You are welcome to join.

[1] “I know one thing: that I know nothing”- The Socratic Paradox

[2] “If anyone imagines that he knows something, he does not yet you as he ought to know” – 1 Corinthians 8:2

[4] “’I see that we can know nothing’, Then that is a conclusion, a result. It is something entirely different than when a student repeats this statement in the first semester of college to justify his laziness” Kierkagaard’s exceedingly witty, if not painfully true, qualifier of [3].

This week I stepped into a city deeply marked by issues such as mass incarceration, illegal immigration, gentrification, food deserts, human trafficking, drug addiction, underperforming tenured teachers who can’t be fired, homelessness, refugees, police corruption, gangs, where violence and structural injustice are everyday realities, not just headlines on a CNN app. The neighborhood where I am working and living this summer historically has one of the highest rates of robbery in the nation.[5] Socio-economic classes are so stratified in Oakland that people in the upper class “hills” live approximately 15-20 years longer than those who living in the lower class “flat lands.”

As I began to spend time in Oakland I learned that I stepped into a city marked by incredible street art that honors the inspiring narrative of individuals and the community, by being the first middle class African American establishment in the nation, by pioneer movements towards restorative justice within the prison and educational system, by advocacy and protests – I mean come on – this is the birthplace of the Black Panthers, Occupy Wall Street, and more recently, the Black Lives Matter movement. Did you know West Oakland was known as the “ Harlem of the West ” during the Harlem Renaissance because of Oakland’s booming jazz nightclub scene and vibrant hub of black culture and art?

Prior to this week I was nervous to drive through the city of Oakland.

This week I have still been uncomfortable while driving through Oakland.

Yes. That is embarrassing.

[5] My grandparents are not pleased. 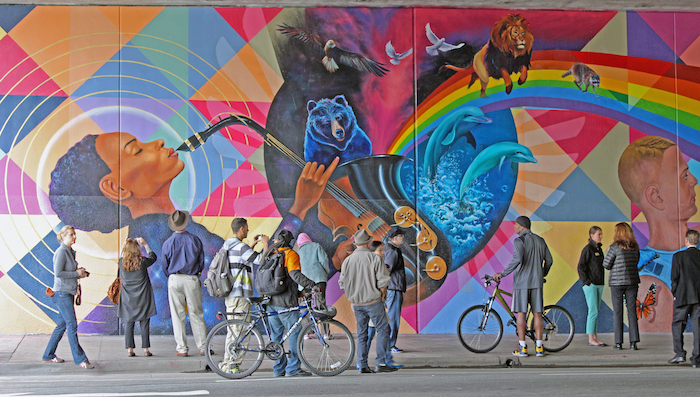 (Photo by Spencer Whitney of the mural “Superheroes,” commemorating the Harlem of the West)

When the opportunity presented itself for me to do a project on lived theology creating and implementing a reading, art, and gardening program for refugee youth in east Oakland, my immediate response was a visceral discomfort accompanied by increased heart palpations. I suppose I can partially ascribe these feelings to being both explicitly and implicitly told my whole life by protective adults that as a 5’1” white girl I need to prudently avoid any perceived areas of danger. Once I clinically diagnosed myself, as any good nursing student does, with “fear related to irrational socialization as evidenced by shortness of breath and diaphoresis[6],” I immediately understood that I had no option but to pursue the project. I repeated like a broken record what my mission-oriented church emphasized to me growing up, “uncomfortable is good, uncomfortable is growth, growth is good.”

I have become far too comfortable in my religion classes attempting to pontificate about the nuances of how then shall we live according to some lofty theology ideology. These presumptuous musings can far too often be abstracted from the lived reality of.. well, actual humans, because they do not take into serious consideration the diversity of lived experience. They do not listen, sit with, and seek to understand firsthand a sufferer. My fellow Project on Lived Theology intern Rachel Prestipino[7], ironically said late one night as we were bitterly struggling through a paper, “God forbid any papers we write for religious studies be too practical!” While students of religion might chuckle along in solidarity, an erudite (and therefore largely impractical) engagement with religion in the academy is the antithesis of the Project on Lived Theology’s vision. Far too often a ground-up, grassroots sort of theological vision is missing because it’s in an ivory tower (picture here Rapunzel, locked up, smoking a pipe, and designing a habitat for sea horses). Kind of irrelevant.

Heather Warren, a professor at the University of Virginia and an Episcopal priest, contributes to this conversation when she distinguishes between theological analysis and theological reflection. Theological analysis is where an argument is deconstructed, identified, and ethically implicated whereas,

In a paradoxical way, it is easy to study theology five days a week with such an analytically-orientated framework that one may shroud’s oneself from engaging the living God. There is no transformation in mere analysis; the question of how then shall we live will never be satisfactorily explored so as promote genuine human flourishing. Stanley Hauwerwas of Duke University humbly recognizes early in his Gifford lecture that, “at best, theology is but a series of reminders to help Christians pray faithfully” (With the Grain of the Universe 16).

What does it mean to pray faithfully?

Is it quantity or quality?

Maybe it’s merely an apophatic moan to God that reflects our lack of knowledge?

Maybe it’s a prayer for transformation of our relationship with God and others.[8]

This summer, aligned with the project’s vision, I intend to let my journey in Oakland not simply be a pragmatic humanitarian effort, nor let it be merely an exercise in religious anthropological exploration. I hope to understand what it means: blessed are the poor in spirit, for they shall see the kingdom of God (Matthew 5). I hope to catch glimpses of and participate in the Kingdom of God through engaging in life with and learning from those around me. Ultimately I hope to allow God to transform me in my relationship with Her and with those around me in prayerfully seeking first the Kingdom.

Whatever that really means.

(As I like to call it: baby steps of sanctification)

[7] Who also happens to be my classmate, roommate, best friend, etc.

[8] It’s funny, I think the Desert Fathers all the way back in 400AD said something similar to my italic-bolded prophetic proclamation, which in hindsight appears relatively simple