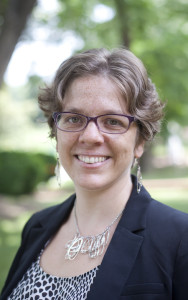 When reflecting on the most important insight from this study, Kelly states:

“By imposing upon his congregation the scriptural values and characteristics of the Kingdom of God in light of the Pentecost experience of Acts 2, Pastor Miguel’s lived theology can be described as the insurgent multiculturalism of Beloved Community. Unlike other multicultural approaches within mainline Christian churches that encourage assimilation to the majority-white culture, Pastor Miguel’s approach encourages his congregants to move towards a congregation in which: 1) the leadership works as a team and reflects the diversity of the community’s demographic and 2) “se come la comida de todos” (everyone eats the food of everyone). This is not an International Day form of sharing, but rather a practice that becomes part of the fabric of community life. Through this organic approach to multicultural training, Pastor Miguel’s hope is that the long-term, majority-white, and English-speaking members could lead their congregation alongside non-English-speaking immigrants, with every person functioning as a full participant in the leadership process.”

This research contributes to the growing body of literature on multiracial congregations by offering a unique ethnographic perspective missing from the scholarship—an in-depth examination of a non-multicultural congregation’s approach to developing multicultural ministries. Hermeneutical ethnography as it is applied in this study also offers a new method for Christian ethnographers, anthropologists, and other scholars interested in how scripture and Christian tradition function in contemporary religious communities, a method that takes seriously the role of texts within the process of lived theological expression.

Kelly graduated last week and has also accepted a one-year faculty position at St. Olaf College in Northfield, Minnesota. She looks forward to offering courses that will explore contemporary scriptural hermeneutics and the lived theology of faith practitioners and Christian communities. 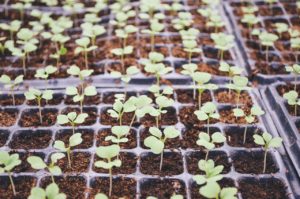 Two UVA students recently attended the Clarence Jordan Symposium at Koinonia Farm, an event focused on honoring Jordan by increasing peace, community, and racial justice in the world today. Megan Helbling and Isabella Hall traveled down together with the support of the Project on Lived Theology.

Isabella was curious about sustainable agriculture and the methodology, struggles, and successes of different intentional communities. Interested in exploring the role of the church in social reform and conciliatory communication, Megan learned about the legacy of housing and economic justice created by Koinonia affiliates. Both women were able to meet notable activists from mainstream Protestantism and heard notable Christian activists and thinkers, including Jonathan Wilson Hartgrove, Shane Claiborne, William Barber, and Ruby Sales.

Reflecting on the stories of Koinonia workers, Megan stated:

“While inspired by the life of Clarence Jordan, I am reticent to idolize him because the narrative of Koinonia often prioritizes Jordan’s biography over the women and African Americans who labored alongside him. Since the voices of those marginalized actors often go unheard, this conference unexpectedly was an opportunity to celebrate the folks who often aren’t honored in the usual telling of this history…The speaking style that most of the highlighted speakers adopted the form of storytelling, whether about their own intentional communities, their experiences in peace movements, or formative interactions with Jordan or Koinonia. Coming from the environment of UVA, this
gave us an opportunity to consider new ways of learning that are different from the academic lectures to which we’ve grown accustomed. Storytelling, we realized, is a much more relational and distinctly communal form of learning and sharing knowledge. It represents a more peaceful, less assertive style of instruction, as it doesn’t assume that all knowledge manifests itself into different lives, communities, or cultures the same way. Rather, it offers one isolated example of the ways that one person encountered different lessons or themes, and invites the listener to extrapolate their own meaning or application for the story into their own lives.”

Isabella was interested in comparing her experience living in the Perkins House at UVA to the experience of living at Koinonia Farms, as well as being able to reflect on the Civil Rights Movement through the people she met:

“Without a doubt, the people we encountered were my favorite piece about the Clarence Jordan Symposium. From Mennonite Pastors Sarah Thompson and Joanna Shenk, to our new friend Gabriel, a current Koinonia resident, and finally, founding Koinonia members themselves. Physically inhabiting the same spaces which served as battleground for ethnic and economic justice during the Freedom Movement was impactful. I couldn’t help but be reminded on Charles Marsh’s notion of the American South as Theological Drama and indeed, we had entered into enfleshed theological drama. For instance, the symposium was hosted at the very Methodist and Baptist Churches which excommunicated Jordan and his Koinonia flock years ago. The church doors which were once unconditionally closed to Black Americans now hosted a symposium committed to racial reconciliation and strategizing for combat against systemic racism. Attending the conference was important for both Megan and I in order to understand how our own justice- work and theological experiences are situated within a broader narrative, that is, the unfinished business of the Civil Rights Movement.” 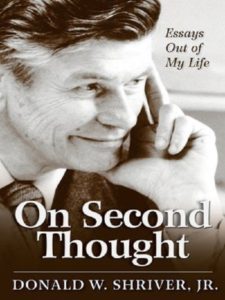 Essays Out of My Life

Donald Shriver, Jr. has had a distinguished career. Trained as a minister and a Christian ethicist, he won the Grawemeyer Award in Religion for his 2005 book Honest Patriots and served for 16 years as president of Union Theological Seminary in New York. In his memoir, On Second Thought, Shriver offers his insights on a variety of topics and his hopes for the future. Subjects range from a chapter on ecology based around his own experiences at his family property and his reflections on the life of his eldest son, to his appreciation for Beethoven. In the introduction Shriver say he aimed to follow the advice of a friend, to avoid making this book a scholarly tome replete with footnotes and instead to “write it from the heart.” The result is a religious and deeply personal book of essays.

“In Chapter 5, Shriver puts this wise question: “Whoever grew up without a lot of help?” (p. 68) However we grow in life, and whatever we accomplish in life, we do so on the shoulders of others. I have been inspired also by Shriver’s reverent practice of reaching out and offering “thank you” messages to several persons who have shaped his life. Shriver’s chapter on friends and friendship describes friends as “gifts arriving in one’s life without notice or asking.”  In his final chapter, Shriver offers an intriguing letter about his hopes for his great-grandchildren that he will never see: That they will be alive and well in 2060. That they will be daily grateful. That they will be honored to belong to a worldwide human family. That they will be deeply in love in a permanent marriage of companionship and fidelity. That they will be faithfully aware that they are greatly loved and empowered to love by a “love divine, all loves excelling.”  I chose this book as the basis for our retreat discussions because Shriver winsomely articulates what has been ultimately important to him and his life pilgrimage. I believe his reflections provide a remarkable instrument for exploring what is ultimately important for each reader.”—Dean K. Thompson Former president, Louisville Presbyterian Theological Seminary

Donald W. Shriver Jr. is an ethicist and an ordained Presbyterian minister who has belonged to the U.S. Council on Foreign Relations since 1988 and was president of Union Theological Seminary from 1975 to 1991.