“From the Phraseological to the Real”: Lived Theology and the Public University

On February 23, Charles Marsh will deliver a lecture at the Berkeley Center for the Study of Religion as part of their culminating conference for a project focused on the place of theology in the university.

The BCSR says the main goal of the project “was to challenge narrow conceptions of both secular learning and ‘theology,’ in hopes of fostering robust conversation about the teaching of religion in the pluralist setting of the modern university.” This conference will focus on three major areas of inquiry: Theology and the History of Learning, Theology and Modern Secular Disciplines, and The Limits and Possibilities of Theology in a Pluralist World. It runs from February 22-23, and Marsh will be giving his lecture on February 23 at 4:00.

Find more event information on BCSR’s website here. For a full listing of our spring speaking engagements with Charles Marsh and others, visit our events calendar here.

On February 26 – 28, Professor Marie Griffith will be speaking as part of the Richard E. Myers Lecture Series at University Baptist Church. The lectures will be at 5 PM each day. Professor Griffith will be giving a series of lectures entitled “Can a Fractured Nation Make Peace? Facing History and Restoring Our Deepest Values.” The title of the three lectures included in the series are “Legacies of Slavery: The Value of Truthfulness,” “Welcoming the Stranger: The Value of Empathy,” and “Sex and Religious Liberty: The Values of Conscience and Compromise.”

The abstract for this lecture series is included below:

“Countless political and social conflicts in America during recent decades have hinged on divergent ways of telling the nation’s history and describing the values we share in common. Particular disparities appear between different ways of talking about the legacies of slavery and racism, the dehumanizing treatment of native Americans and immigrants, and the bitter struggles over sexuality, women’s rights, and religious liberty. In this era of extreme polarization and deep fracturing within American Christianity as well as U.S. politics, can we cultivate a sense of shared history and a shared future that is truthful about the nation’s past and united in honoring the values that will guide its future? These lectures take on these difficult subjects with an eye toward restoring such values as truthfulness, empathy, conscience, and compromise, so as to foster a bearable peace.”

Professor Griffith is the Director and John C. Danforth Distinguished Professor in the Humanities at the John C. Danforth Center on Religion and Politics at Washington University in St. Louis. She published Moral Combat: How Sex Divided American Christians and Fractured American Politics in 2017, which connected modern political issues to centuries old debates among American Christians. 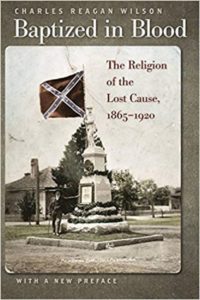 In Baptized in Blood, Charles Reagan Wilson has created a significant and well-written study of the South’s civil religion, one of two public faiths in America. Wilson shows how in the wake of the Civil War, southerners adopted the Lost Cause as a way to preserve their cultural identity by blending Christian rhetoric and symbols with the rhetoric and imagery of Confederate tradition.

A “civil religion” has been defined as the religious dimension of a people that enables them to understand a historical experience in transcendent terms. The defeat of the Confederacy threw into question the South’s relationship to God; it was interpreted in part as a God-given trial, whereby suffering and pain would lead Southerners to greater virtue and strength and even prepare them for future crusades. The Lost Cause movement was an organized effort to preserve the memory of the Confederacy, but Wilson also argues that the Lost Cause was an authentic expression of religion, and was celebrated and perpetuated with its own rituals, mythology, and theology.

In examining the role of civil religion in the cult of the military, in the New South ideology, and in the spirit of the Lost Cause colleges, as well as in other aspects, Wilson demonstrates effectively how the religion of the Lost Cause became the institutional embodiment of the South’s tragic experience.

“This study merits reading not only because it explores the delicate fusion of religious and cultural forces, but also because of the careful research which undergirds its arguments.”—Journal of the American Academy of Religion

“If the South cannot escape its history, perhaps it is because it does not want to. Wilson’s magnificent book on the religion of the Lost Cause drives that point home forcefully. . . . He skillfully weaves together the strands of thought that produced the Lost Cause and shows that evangelical ministers had a large hand in the process.”—Theology Today

“Destined to be the definitive essay on the relation between religion and southern regional patriotism.”—Journal of Southern History 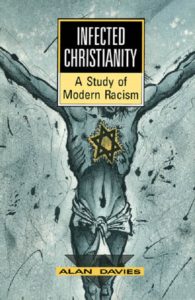 A Study of Modern Racism

In Infected Christianity, Alan Davies focuses on five modern “Christs” to examine how the Christian church has succumbed to the infection of racist ideas. Davies shows that the myths of race and nation, innocent in themselves, have evolved into “sacred” myths and histories which not only infected Christianity but, in the case of Germany and South Africa, served to legitimize ruling racist elites.

The Germanic Christ is discussed first and most extensively. French Roman-Catholic racism is next, particularly its role in the Third Republic, through discussion of the “Latin” Christ. Davies’s study of the Anglo-Saxon Christ covers both English and American expressions of racism and their links to imperialism, which is followed by a discussion of Afrikaner racism, and an exploration of black nationalism in the United States and its advocacy of a black Christ.

In this book, Davies traces the course of racism to its roots in the religious, cultural, and intellectual history of western civilization and to its culmination in the formation of the Aryan myth – the great race myth of white Europeans.

“A succinct and significant overview of the subject…such an overview would be welcomed by a mainline Christian readership…For secular readers of social history…it could provide an honest and interesting glimpse into the ongoing struggle between Christianity and culture.” D.J. Hall, Department of Religious Studies, McGill University