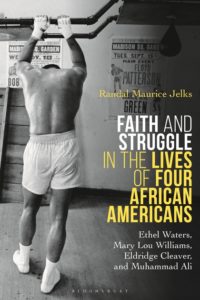 In Faith and Struggle in the Lives of Four African Americans, author Randal Jelks shows that to understand the black American experience beyond the larger narratives of enslavement, emancipation, and Black Lives Matter, we need to hear the individual stories. Drawing on his own experiences growing up as a religious African American, Jelks explores the faith stories of four African Americans: Ethel Waters, Mary Lou Williams, Eldridge Cleaver, and Muhammad Ali. He examines their autobiographical writings, interviews, speeches, letters, and memorable performances to understand how each of these figures used religious faith publicly to reconcile deep personal struggles, voice their concerns for human dignity, and reinvent their public image.

In 1964, Muhammad Ali said of his decision to join the Nation of Islam: “I know where I’m going and I know the truth and I don’t have to be what you want me to be. I’m free to be what I want to be.” This sentiment, the brash assertion of individual freedom, informs and empowers each of the four personalities profiled in this book.  For them, liberation was not simply defined by material or legal wellbeing, but by a spiritual search for community and personal wholeness.

“[Faith and Struggle in the Lives of Four African Americans] offers a fascinating look into the religious lives of four individuals, and Jelks also weaves his own religious narrative in and out of the stories he tells.” –  Anxious Bench 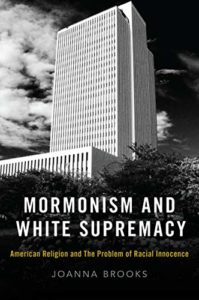 American Religion and The Problem of Racial Innocence

In Mormonism and White Supremacy: American Religion and the Problem of Racial Innocence, author Joanna Brooks examines the racist traditions present in her own religion in order to bring to light the role American Christianity has played in sustaining everyday white supremacy by assuring white people of their innocence. Like most difficult subjects in Mormon history and practice, the priesthood and temple ban on Blacks has been managed carefully in LDS institutional settings with a combination of avoidance, denial, selective truth-telling, and determined silence.

To this day, churchgoing Mormons report that they hear from their fellow congregants in Sunday meetings that African-Americans are the accursed descendants of Cain whose spirits—due to their lack of spiritual mettle in a premortal existence—were destined to come to earth with a “curse” of black skin. It is often more controversial to state the truth, that the ban on the ordination of Black Mormons was a product of human racism. Like so many Christians, it is easier for Mormons to deny their racist history than to confront it head on. But now, as America begins to come to terms with the costs of white privilege to Black lives, Brooks urges a soul-searching examination for white Christians who previously presumed themselves to be innocent.

“It is one of the most trenchant and persuasive appeals to confront the history of LDS anti-black racism, past and present, and is a clarion call for academic intervention in contemporary issues.” — Benjamin E. Park, Sam Houston State University

“Dr. Joanna Brooks boldly interrogates the impact of white supremacy on American Christianity, and specifically her own formation within Mormonism. Her work offers an unabashed examination into the history of racism within the Church. This detailed exploration into how racism lives and breathes within the Latter-day Saint religion is an important read for any white American Christian. It is, in part, a spiritual awakening to confront the demons of racism within one’s religious beliefs and Joanna Brooks is willing and called to lead you into that awakening” — Rev. Dr. Fatimah Salleh, founder of A Certain Work

“Joanna Brooks frankly reminds us that white supremacy doesn’t just happen. It is created, cultivated, passed on, sanctified, then perpetuated through forgetfulness. Mormonism emerges here as the quintessential American religion, but in the unenviable mode of participating fully in the nation’s original sin of anti-black racism. This book is strong medicine without the spoonful of sugar-but precisely the kind of medicine that may help effect a cure.” — Patrick Q. Mason, Utah State University 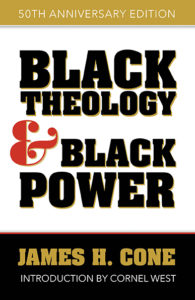 In Black Theology and Black Power, author James Cone relates the militant struggle for liberation with the gospel message of salvation. When this book was first published in 1969, it was the first systematic presentation of Black Theology, and laid the foundations for an interpretation of Christianity from the perspective of the oppressed that retains its urgency and challenge today.

In an earlier preface to Black Theology and Black Power, Cone wrote:

“This book was my initial attempt to identify liberation as the heart of the Christian gospel and blackness as the primary mode of God’s presence. I wanted to speak on behalf of the voiceless black masses in the name of Jesus whose gospel I believed had been greatly distorted by the preaching and the theology of white churches.”

“This text changed the lives of thousands and thousands of young brothers and sisters of all colors who were wrestling with the question: what does it mean to be Christian in a turbulent time in which the vicious legacy of white supremacy was being contested, pushed back as it were?”—Cornel West 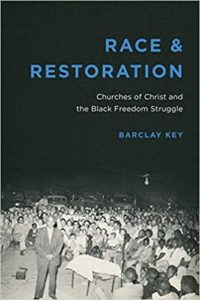 Churches of Christ and the Black Freedom Struggle

In Race and Restoration: Churches of Christ and the Black Freedom Struggle, author Barclay Key discusses the interracial congregations of the Churches of Christ and how they managed race relations during the Jim Crow era and subsequently adapted to the dramatic changes of the 1960s. The churches of Christ had always operated outside of the conventional racial customs in America; Because these exclusionary churches perceived themselves as the only authentic expression of Christianity, it compelled them to embrace peoples of different races, even as they succumbed to prevailing racial attitudes. Many of their congregations, even deep in the South, counted whites and blacks among their numbers.

This meant that as the civil rights movement began to challenge pervasive social views about race, Church of Christ leaders and congregants found themselves in the midst of turmoil. Key shows how the Churches of Christ can offer a unique perspective for observing how Christian fellowship and human equality intersected during this time, and how racial attitudes and practices within individual congregations elude the simple categorizations often employed by historians. Although the Churches of Christ did have a more racially diverse composition than many other denominations in the Jim Crow era, Key shows that their members were subject to many of the same aversions, prejudices, and fears of other churches of the time.

“This is a carefully written study that embraces the messiness of human life, while simultaneously maintaining a fluid, engaging style. Scholars attuned to the importance of religion as a lens for social, cultural, and political analysis will appreciate Key’s fresh insights on the complex interplay between race and faith in an understudied institution common across the American South. — Sean P. Cunningham, author of American Politics in the Postwar Sunbelt: Conservative Growth in a Battleground Region“