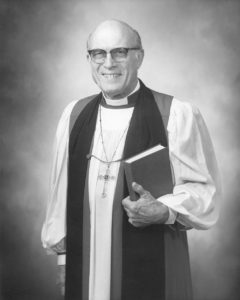 Gray dies at 89 at home in Jackson

A fourth generation Mississippian, Duncan Gray was born in Canton on September 21, 1926. Noted for his courage in standing against racial segregation, injustice and violence in the 1950s and 1960s, Gray served congregations in Cleveland, Rosedale, Oxford, and Meridian following his ordination as a deacon and priest. He served as bishop for 19 years, retiring in 1993. From 1991 to 1997 he acted as Chancellor of the University of the South in Sewanee and later as interim chaplain and interim dean of the School of Theology. Until his death on July 15, 2016, Gray made equality and fairness central to his life’s work in spite of resistance, consternation, and disapproval. His life and work is chronicled in the biography written by Will Campbell entitled, And Also With You: Duncan Gray and the American Dilemma.

In a 1993 interview with Charles Marsh, Gray reflects on speaking at Mississippi State University in 1956:

“I made my speech… The only thing that got anybody’s attention was segregation and integration… Long and short of it was, the legislature was in session, this was in February and there was all kinds of pressure on the college president, although this particular college president was very sympathetic to the legislature’s position… when it came out in the morning he came to me and gave me three options. He said I could retract the statement, basically that segregation is un-Christian… or I could say I was misquoted or I would have to leave.”