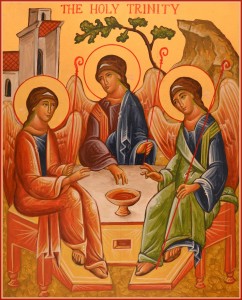 If there’s one way to start a blog post as to ensure minimal readership, it’s by opening with Trinitarian theology. That’s my guess, at least, although Kantian moral epistemology might make a close second. But hold on, I promise it’ll get better. Hotly debated for centuries following Christ’s resurrection, this mysterious “three-in-one” conundrum has been key to Christian theological reflection, dubbing its advocates orthodox and its dissidents heretical since 325 A.D. (I’m looking at you, Arius!) It’s this particular theological concept which married co-authors Myroslaw Tartaryn and Maria Truchan-Tartaryn use to illuminate their understanding of disability in their book Discovering Trinity in Disability. The Trinity is pretty weird: the Father (or Mother), Jesus the Son, and the Holy Spirit are in some sense distinct from one another, but are all unified in another sense. The above picture is a famous work of art by Andrei Rubilev, the great medieval Russian painter of Orthodox icons and frescos. Despite the fact that each member of the Trinity is depicted as a European male, the picture is a powerful portrayal of the divine fellowship as understood by Christians through millenia. Each person is given the title “God,” and somehow there is only one of those, yet three of them.

The tension in describing the Trinity is one between coherence and incoherence. How obscure does our picture of God have to be before our speech loses its meaningfulness? Tartaryn quotes Augustine’s explication of the divine beings’ relationship to one another: “The triune communion is a consubstantial and eternal unity; but there is nothing but the persons” (Tartaryn 68). My translation of this: there is no magical Trinity-glue. In whatever sense in which the three persons of the Trinity are unified, there is no “extra thing” that binds them together. It is in their very nature as divine persons to be intimately connected to one another. I think this is part of the reason why the Trinity is so hard to explain. All analogies ultimately break down because there just isn’t anything truly comparable in our world to explain the mystery of the divine being. But I also think maybe we’ve been looking in the wrong places. I mean, eggs? Water? Come on, people. Are we talking about breakfast or God?

Although I absolutely believe there is value in parsing out the logicality of our views about God, I am learning that the most important part of this process is what it teaches us about how to love others better. Maybe, if we are made in the image of God, the best way to understand the Trinity actually lies in its application to the mystery of how we as humans relate to one another.

In a totally non-heretical way, I think human relationships are more like the Trinity than we tend to assume. The Tartaryns believe that there is relational power in modeling our relationships off of the Trinity. The fact of three distinct persons being totally unified in will and one in essence can be a compelling image of true community: a community in which unity and distinction are equally valued. Most importantly, the Trinity is an image in which unity and distinction are not mutually exclusive. In fact, they support one another: “Difference is the very foundation of relationship and does not need to be overcome in order to create community.” (Tartaryn 29)  Indeed, one cannot have community without difference. Difference enriches community, but it also makes it a lot messier. If the nature of community is dynamic rather than static, where relationships actually change who we are, it is only through diverse community that we can even aim at that goal.

…Which brings me to this week. I have been reflecting on the meaning and use of community, particularly with regard to the idea of charity. How do we give to others, and how are we to receive? In an environment such as the Virginia Institute of Autism (VIA) in which there is a clear presumed hierarchy of who is giving to whom (instructors give instruction to students), I wonder how we ought to think of our relationships with the students. Do they consist entirely of giving and receiving instruction, where the instructor is always the giver and the student is always the receiver?

An incident from this past week comes to mind: a daily routine gone haywire. It all started with an innocent walk back from the playground. William* dashed off the sidewalk into the parking lot, which he does not often do. Immediately alarmed, I ran after him and eventually attempted to guide him back to the sidewalk. This did not work as well as I had hoped. It appeared that William was heading for a parked car. When I finally caught up to him (6 year-olds are surprisingly fast), he was crying hysterically and trying to open the car’s door. He wasn’t terribly impressed with my attempts to lead him back to the sidewalk, either, biting my arm and intent on prying the car door open. At this point, a fellow instructor again called for backup, and soon I had help leading William back to the classroom. A few minutes later I learned that the car belonged to his parents, and that he probably just wanted to see them.

Later, as I was reflecting on this incident, I realized that earlier that same day William had given me a hug. For a child who has difficulty connecting socially, it was truly a heartwarming gesture. Yet an hour later, there he was, biting me in the parking lot. Community is nice and all, but it doesn’t feel so good when it’s biting you in the arm.

Sometimes moments like that cause me to think that the hierarchical nature of charity is well-founded. I am offering a service to William, and he receives it. “Charity” seems to be a better descriptor than “relationship.” When you think of “charity,” what concepts come to mind? The offering plate in church? The Salvation Army? Sarah MacLachlan holding a pit-bull? Whatever the immediate response, usually we think of charity in a way that subconsciously divides us from those to whom we are being charitable. Despite the fact that charity is understood as a way to aid other people, the word almost never indicates that there is an actual relationship between the two parties. Because the term “charity” is usually synonymous with “giving money to people,” or more often, “giving money to organizations who claim to help people,” I fear that it has become more about the giver than the receiver.

We give money to the malnourished child on T.V. but never allow ourselves to question the systems which contributed to this situation in the first place. We give to organizations to raise awareness about sex trafficking but would feel uncomfortable developing a relationship with a teen prostitute. We give money to organizations who provide weekly lunches for the homeless, but inviting a homeless man to our house for dinner is out of the question. We will give money to causes till kingdom come as long as it allows us to remain relationally “safe.”

Money does not change the world. Relationships do.

Like the Trinity, real relationships are messy. Charity, in this sense, can sometimes be the opposite of relationship. I think I’m learning that there is really no such thing as a pure give-or-take relationship. For better or worse, all relationships change their participants. We can either use people with disabilities as a platform upon which to practice our morality, or allow the presence of the different to usher us into a consideration of our own inherent vulnerability. It is not a choice to be taken lightly.

*Names of students at VIA have been changed to protect their privacy.