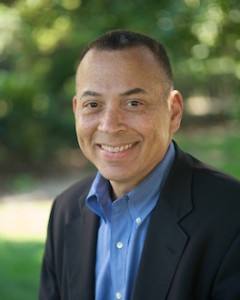 This news series, Can I Get a Witness? The Interviews, features conversations with the Witness participants to highlight how each author is being changed and challenged by the historical figure they are working to illumine. This week’s headliner is Ralph Eubanks, writing on gospel singer and civil rights activist Mahalia Jackson.

When you were first invited to write about Jackson, what was your reaction?

“The first thing I thought about was how much I listened to Jackson growing up. Many Sunday mornings, my father would play her album… When he listened to ‘In the Upper Room,’ he was always dressed in a dark suit with a dark skinny tie and he would stand over the record listening to it with his head bowed. As I studied Jackson’s singing style and learned what she tried to evoke for an audience when she performed, I realized my father used Jackson’s music to center himself in prayer before church. It’s something I had never thought of before.”

In your research, what has surprised you about Jackson?

“As I began my writing about Jackson, I studied her performing style—I see her performances as the major primary source on Jackson as a figure of radical Christian witness—and noticed how she became another person on the stage in the course of a performance.  There was something happening, but I was not sure what it was. In shots of the audience, you can see people absorbed by the power of her performance, both from her voice and the emotion she communicates to her audience. Over the summer I went to the Chicago Historical Society to listen to a 1953 interview Jackson did with Studs Terkel, who many consider the father of modern oral history. In that interview, the first question Terkel asks is, ‘what goes on inside you when you sing?’ Jackson responded by saying ‘I truly have a divine feeling inside me. I don’t seem to be myself, I am transformed from Mahalia Jackson into something divine.’ Then it hit me: Jackson’s performances were transformative moments for her, the moments when she felt a connection with the divine and was at one with God.”

Can you tell me a story from Jackson’s life that illustrates something crucial about who she is?

“Five years after her public announcement of support for civil rights in the Berkshires, the Reverend Ralph D. Abernathy asked Jackson to perform in Montgomery, Alabama, at a symposium on the politics of social change. The event also honored those who had kept the bus boycott going. When Abernathy asked Jackson what her fee would be, her response was ‘I aint comin’ to Montgomery to make no money off them walkin’ folks!’ Jackson performed in Montgomery for free and for the benefit of the ‘walkin’ folks’ rather than charging them.”

How is spending time with Jackson affecting you?

“Writing about Jackson is reconnecting me with part of my past and my childhood and in a good way. I even find myself driving around listening to Jackson… When I listen to ‘Move on Up a Little Higher,’ I know I am doing what Jackson wanted, since she said, ‘I really feel it is wonderful for people of the world to stop and listen to a sacred record. The Lord commanded us to go in the highways and hedges and compel men to come to God.’ And I have listened to Jackson on the highways and hedges.”

Ralph Eubanks is the Eudora Welty Professor of Southern Studies at Millsaps College. Eubanks has contributed articles to the Washington Post Outlook and Style sections, the Chicago Tribune, Preservation, and National Public Radio. His publications include The House at the End of the Road: The Story of Three Generations of an Interracial Family in the American South (2009) and Ever Is a Long Time: A Journey Into Mississippi’s Dark Past (2003), which Washington Post book critic Jonathan Yardley named as one of the best nonfiction books of 2003. Eubanks is a recipient of a 2007 Guggenheim Fellowship and has been a fellow at the New America Foundation.