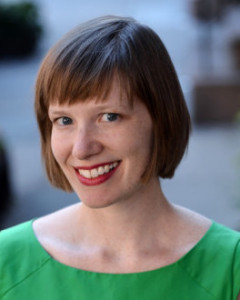 This news series, Can I Get a Witness? The Interviews, features conversations with the Witness participants to highlight how each author is being changed and challenged by the historical figure they are working to illumine. This week’s headliner is Carlene Bauer, who is writing on social justice champion Dorothy Day.

In your research, what has surprised you about Day?

“What’s been surprising is to overhear her, through her diaries, in her later years, muse on the possibility of writing about what she did not write about in The Long Loneliness and elsewhere.”

If you could call up Day this weekend and invite her out, where would you go and what would you do?

“This sounds very strange, but I think she would like it. There’s a retrospective of the painter Agnes Martin at the Guggenheim in New York City—she was an abstract painter who worked in the 50s, 60s, and 70s. Martin, like Day, led one life and then quite another—Martin lived in Manhattan among art stars of the 50s, and then took off for the desert of New Mexico. Martin, like Day, found beauty in the very simplest elements of nature, and painted to communicate hope and joy to others through lines and colors that, working together, create a radiance that could be read as spiritual if one chose. I feel that Day would understand and be intrigued by the biography and the impulse, even if she might not fully embrace the art that resulted.”

How is spending time with Day affecting you?

“As a person, and then an erstwhile person of faith, spending time with Day is making me—and especially, especially now given our president—reconsider how I might work to realize the changes I would like to see in both the city and the country I live in. As a writer, it’s been instructive to read The Long Loneliness again and see how much dramatic tension she creates without admitting to all the facts. In this way the book–which she preferred to call a conversion story and not an autobiography because it did not tell the whole story behind her conversion–is not unlike Thomas Merton’s The Seven Story Mountain, which does not tell all and yet still makes us turn pages. Also, I keep thinking about what a friend of Day’s said about her—that secretly Dorothy was a poet.”

What piece of advice can you imagine Day offering to the United States or the world today?

“I wouldn’t presume to answer this, but I will say that her writings, whether it’s the journalism from her girl reporter days in 1916 New York City, or her writings from, say 1966, continue to show us a way to look at and combat injustice.”

Carlene Bauer is a writer whose publications include Not That Kind of Girl (2009) and Frances and Bernard (2014). Her work has been published in The Village Voice, Salon, Elle, and The New York Times Magazine. Bauer currently works in and around New York publishing.