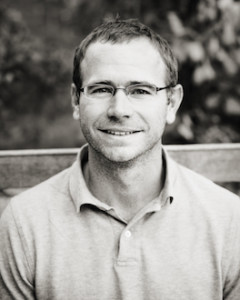 This news series, Can I Get a Witness? The Interviews, features conversations with the Witness participants to highlight how each author is being changed and challenged by the historical figure they are working to illumine. This week’s headliner is Daniel Rhodes, whose figure is Union leader and labor organizer Cesar Chavez.

In your research, what has surprised you about Chavez?

“One thing that has surprised me about Chavez is how devout he was. Organizing and the cause of the farmworkers really become fused with his Catholic faith, not in a fundamentalist way, but in a way that’s offered a refreshingly new perspective on the place of faith and liturgy as public work.”

Can you tell me a story from Chavez’s life that illustrates something crucial about who he is?

“I have two, though there are many. First, though Chavez was somewhat instinctively the kind of dedicated worker that makes for a good organizer, he was also not by nature a self-confident leader. Apparently, when Chavez first started initiating house meetings, he was completely terrified of leading them. He would often drive around the neighborhood where the meeting was to be held multiple times before he could muster up the courage to go in. Once inside, he would swiftly move to the corner of the room and recoil in silence until he was forced to introduce himself as the head organizer! This story, for me, presents a window into the kingdom figure of Cesar Chavez, whose divine gifts were not surface level charisms but deeply developed and cultivated essential assets located in an unlikely place. In some sense, the union and the movement he helped generate embody this very kind of divine gift to the American church.

Second, in 1963 a man named Manuel Rivera approached Chavez with a complaint about his labor contractor. After questioning the contractor about the wage rate on work he’d already done, Rivera was subsequently fired and his car broke down. When Chavez learned about this, he and his wife Helen took the Rivera family into their tiny home and let them borrow one of their cars until they could afford their own housing and transportation. He would not allow Rivera to pay him anything in return. After disappearing for six months, Rivera returned to town and immediately paid union dues for every month since Chavez had housed him. Rivera become one of the most dedicated early members of the organization and an ardent devotee to Chavez. Three years later in 1966, Rivera would even sacrifice his body for the nascent union, when he was hit by a grower’s truck while standing in a picket line and left permanently crippled. Rivera so admired Chavez and had become so committed to the cause that, even after the accident, he never regretted his involvement. I think this short story displays the way in which Chavez’s own character suffused the farmworker movement.”

What piece of advice can you imagine Chavez offering to the United States or the world today?

“I imagine Chavez would ask us to seriously interrogate our allegiances, especially now with all that has happened this past year. I think in the same breath he’d remind us that its more important to build the relationships necessary to carry the work of justice forward than to develop elaborate schemes and plans for ‘making it happen.’ For him, justice and the aim of the cause could never be abstract or general but it was always first interpersonal and relational. This is why he really viewed the union as a family more than simply a vehicle to gain power or to elevate his status. Winning could not be divorced from love.”

Daniel Rhodes is the faculty coordinator of contextual education at the Institute of Pastoral Studies at Loyola University Chicago. As the title of his dissertation for Duke University Divinity School implies, his work focuses on “The History of the Future: Apocalyptic, Community Organizing, and the Theo-politics of Time in an Age of Global Capital.” Rhodes is interested in political theology, broad-based community organizing, capitalism and christianity, globalization, sovereignty and governance, and war and peace studies. His publications include Free for All: Rediscovering the Bible in Community (Baker Books, 2009).