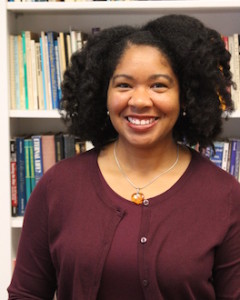 This news series, Can I Get a Witness? The Interviews, features conversations with the Witness participants to highlight how each author is being changed and challenged by the historical figure they are working to illumine. This week’s headliner is Donyelle McCray, whose figure is the prominent theologian Howard Thurman.

In your research, what has surprised you about Thurman?

“How overwhelmed he was. His schedule was grueling and he paid for it with his health—especially when he entered his 50s and 60s. Finding serenity is one of the anchors of his teachings yet it seems to have been a rather elusive thing in his own life.”

Can you tell me a story from Thurman’s life that illustrates something crucial about who he is?

“When he was in Colombo during a tour of India, Burma and Ceylon, he had dinner with a British government official. (This was 1936 so this was a colonist.) While at dinner he noticed a fan overhead that was swatting flies away and providing a gentle breeze. As he gazed at the fan, he noticed that it was tied to a pole and the pole to a pulley and the pulley to a rope that extended into another room. Upon rising from dinner, he discovered that the rope was tied to a man’s foot! This man had been operating the fan all along and Howard was disgusted by it. There’s something about invisible, disrespected labor that outraged him. The fact that he was curious enough to follow this benefit of a small breeze to its source says something about how unentitled he was. He was a deeply humble person. Very tender.”

How is spending time with Thurman affecting you?

“He’s made me want to be a different kind of teacher and preacher. In his sermons (and other writings) he gets to such a deep, universal place. As I spend time with his work, I want to spend more time listening to him. I’ve been reading his work for years but I had heard fewer recordings of address. Now, after spending hours and hours listening to him I have a better sense of his voice on the page and otherwise. And I just enjoy the experience and feel nurtured by it.”

What piece of advice can you imagine Thurman offering to the United States or the world today?

“Learn to be tender to one another and to the earth. No soul flourishes in an environment that is constantly harsh and running at too quick of a pace.”

Donyelle McCray is Assistant Professor of Homiletics, Director of Multicultural Ministries, and Associate Director of the preaching program “Deep Calls to Deep” at Virginia Theological Seminary and will join Yale Divinity School this fall as the Assistant Professor of Homiletics. Her primary research interests include homiletics, spirituality, Christian mysticism, and ecclesiology. She is the recipient of the Bell-Woolfall and the James H. Costen North American Doctoral Fellowships.