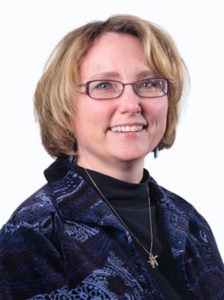 This news series, Can I Get a Witness? The Interviews, features conversations with the Witness participants to highlight how each author is being changed and challenged by the historical figure they are working to illumine. This week’s headliner is Therese Lysaught, who is writing on Sister Mary Stella Simpson, a midwife who revolutionized the field of maternal-infant health and family-centered care throughout the twentieth century.

In your research, what has surprised you about Simpson?

“I think the thing that surprised me most was that she was a convert from the Baptist tradition! I do think there were a number of ‘radical’ Christian witnesses from the mid-part of the 20th century (Dorothy Day, Thomas Merton, maybe Rose Hawthorne from the previous century) who were also converts, but I never expected a Sister working in Catholic health care to not have been raised Catholic. I was also surprised to learn that she was really the one who pioneered the now common practice of allowing fathers (and family members) to be in the delivery room with birthing mothers.”

Can you tell me a story from Simpson’s life that illustrates something crucial about who she is?

“There’s a story she tells in her letters… she was doing a home visit in the Bayou and the family was without food. And she discovered that the mother was unable to receive a check that she had coming to her (some form of public assistance, I think) because the postmistress wouldn’t give it to her. This was apparently a common Jim Crow sort of practice. So she went down to the post office and in her older nun sort of way threatened the post mistress—and then that practice apparently came to an end. There are a series of stories of her confronting Jim Crow practices in her community. She had no fear!”

How is spending time with Simpson affecting you?

“One of the many great things about her story was that she kept opening herself up to new ministries and new opportunities for discipleship. She goes to the Bayou when she’s 57 and embarks on a completely different kind of work with the poorest of the poor. She’s had me thinking about what sort of chapters may lie ahead for me.”

What piece of advice can you imagine Simpson offering to the United States or the world today?

“If we want to transform the world, the first step is to make sure we see every person as a person—which requires going to them, going to where they live, listening to their story, hearing from them what their needs are, and then working really hard to help them address those needs.  It really only is this sort of radical accompaniment (aka, solidarity) that can make a real difference. And, it’s how we concretely bring God’s grace to the world, person by person.”

Therese Lysaught is a professor and associate director at the Institute of Pastoral Studies at Loyola University Chicago. Lysaught specializes in Catholic moral theology and health care ethics and consults with health care systems on issues surrounding mission, theology, and ethics. Her publications include Caritas in Communion: Theological Foundations of Catholic Health Care (2014), On Moral Medicine: Theological Perspectives on Medical Ethics (2007), and Gathered for the Journey: Moral Theology in Catholic Perspective (2007), which received third place honors in ‘Theology’ from the Catholic Press Association.