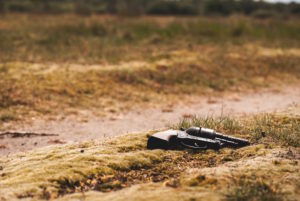 A Christian Critique of the Gun Movement

The gun rights movement is at a high point: there are as many guns as citizens in the US today; the gun lobby has persuaded states to expand the number of public places people can carry guns; and in recent years, gun rights advocates have pushed Open Carry, Campus Carry, Stand your Ground, and Permitless Carry. Gun rights advocates argue they are merely following through with our founders’ intentions. But that is hardly the case; we are engaged in a radical, reckless gun rights experiment, unlike we have ever seen—with public health and social costs still unknown.

The political terrain of the gun debate is treacherous and vexing. Gun control advocates find it impossible to achieve the most basic, minimal regulations—like universal background checks. Polls indicate that Americans overwhelmingly favor gun control, but they do not prioritize the issue in the ballot box. Why is this? Voters are not sufficiently alarmed by our gun violence problem, it seems; or they are not persuaded to take action; or they deem the issue beyond hope.

The usual avenues of support for gun control have struggled of late—to put it mildly. This presentation will explain alternate approaches to galvanizing such support. In particular, there are powerful political arguments to be made against the radical gun rights movement. What’s more, faith based communities can be crucial in calling people to action, and prioritizing the gun debate. In particular, powerful Christian arguments line up against the radical gun rights movement—and they must be deployed widely and intensely.

Drawing on these ideas, DeBrabander will deliver a guest lecture at the University of Virginia, Wilson Hall 301, on Tuesday, March 14, 2017 at 2:00 pm to discuss the “Christian” critique of the gun movement. The event is free, and the public is invited to attend.

Firmin DeBrabander is professor of philosophy at the Maryland Institute College of Art in Baltimore. He completed his graduate studies at the Katholieke Universities Leuven in Belgium, and at Emory University in Atlanta. His publications include Spinoza and the Stoics (Continuum Press, 2007) and Do Guns Make us Free? (Yale University Press, 2015). He has written articles on social and political commentary (notably on the gun debate) in a variety of national publications, including The Baltimore Sun, The New York Times, the Washington Post, the Atlantic, the New Republic and Salon.