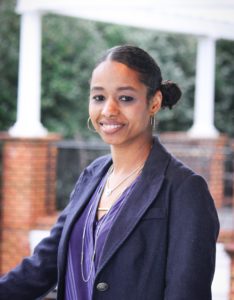 On Embodied Solidarity from the Valleys to the Mountaintops

On February 28, Larycia Hawkins delivered a guest lecture entitled “The Mountaintop as the Valley of the Shadow: Martin Luther King, Jr. and Prophetic Visions from Below.” Aiming to complicate theology from above and the vision of the beloved community, also known as the Kingdom of God in America, the presentation considered our contemporary selves through the lenses of history, namely Martin Luther King, Jr.

By examining the rhetoric and religious appeals in King’s “I’ve been to the Mountaintop” speech, Hawkins traced shifts in King’s theology through the idea of theodicy into a narrative on the sacredness of bodies, through which each of us actualize lived theology. She ended with a discussion on past and present prophets, concluding that we must all be in embodied solidarity with the suffering in the valleys as we work towards the mountaintops of hope and equality for all.

In her discussion of prophets, Hawkins says:

The mistake that Americans, scholars make is to assume that it was only MLK’s prophetic words that propelled the civil rights movements. It was his body offered as a continual living sacrifice in the words of the apostle Paul. It was putting feet to faith, and that’s literally what the gospel means, the good news that Christians profess. It was what I term prophetic pragmatism. If the gospel is putting feet to faith beyond the telling of the truth, prophetic pragmatism does justice in the trenches,  justice despite power from the margins where people live, with or without the state, which is the greatest threat to power as he mentions. The alternative polis, the alternative political community lives pragmatically. Jesus as the quintessential prophet goes beyond mindfulness of the suffering and the oppressed to liberation of their bodies and souls.”

Listen to the entire lecture through its resource page here.

Larycia A. Hawkins is the Abd el-Kader Visiting Faculty Fellow at the University of Virginia’s Institute for Advanced Studies in Culture. She is the recipient of many honors, such as the Bridge Builder Award from The American-Arab Anti-Discrimination Committee (MI) and the Dr. Betty Shabazz Award from Women in Islam Inc. (NY). Dr. Hawkins’ recent publications include “Prophetic and Priestly: The Politics of a Black Catholic Parish” (2015) and “Jesus and Justice: The Moral Framing of the Black Agenda” (2015). Her research engages the intersections of race/ethnicity, religion, and politics. Her writing, speaking, teaching, and scholarship are squarely animated by a conviction that political science should be relevant to the real world.