As I walked into the office on Monday, I was met with the peaceful background noises of 7 a.m. traffic on Pennsylvania Avenue and an empty office to myself for a short while. I spent the beginning of my morning reading out of James K.A. Smith’s third volume in his cultural liturgies trilogy titled “Awaiting the King.” As I was reading, what struck me was his idea that every act, whether secular or religious, intentional or unintentional, is a form of worship.

An hour later, my site mentor walked into the office, and after some small talk, she gave me one of my assignments for the week: a theological reflection on the National Museum of African American History and Culture. I was simultaneously excited and anxious for what I would uncover in this assignment. I’ve done my best to craft a narrative of some of the more significant moments in this experience. However, having spent nearly eight hours in the museum between two days, these are merely a few of the many moving moments I had the privilege to experience. 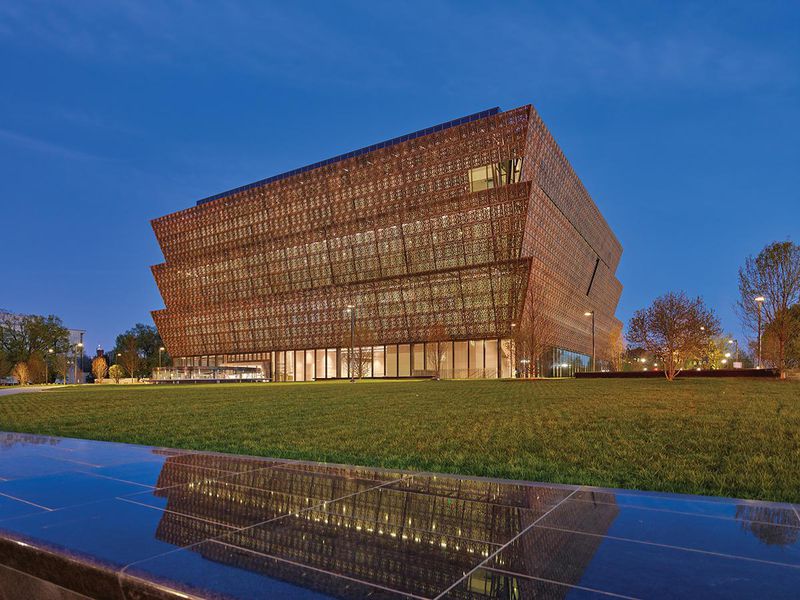 The museum is laid out as a “journey” through African American history, so it is set up for guests to wind their way through a mile and a half of 400+ years from slavery to the present. At one point on the journey, during the period of Reconstruction, I turned a corner and was immediately brought to an abrupt halt. There, encased directly ahead of me and staring back at me with the empty, yet ever-present face of evil, was the hood of a Ku Klux Klan member. I was paralyzed by the reality of its gaze. As I got closer I began to feel the very real aura of intimidation that filled the room around the hood. Poised only a foot away from me, illuminated by an eerily dim light behind the glass, and surrounded with pictures of horror outlined in red for viewer discretion, was a mask that another human being wore with great pride.

I stood there, stunned with fear, confusion, and sadness. My initial reaction was to distance myself from the people who wore these hoods. It felt right to label them as “demons” or “monsters,” but never as people. How could someone standing for so much hate, bigotry, and vile racism be in any way similar to me? It’s often easier and more comfortable for white folks like me to see the ways that we differ from groups like the KKK because it allows us to distance ourselves from the realities of our own racist tendencies. It allows us to continue to turn a blind eye towards the deeply engrained beast of racism that lurks in our own lives. We must learn to use the hood as a mirror. We must allow the chilling gaze of the hood to penetrate our own walled off lives and painfully illuminate our similarities with the Klansmen that are deeply buried in our own lives.

While I was standing there, caught in a storm of emotion, a white mother and her young son walked around me and passed by the hood. The little boy tugged on his mother’s arm and asked her, “Mommy what is that mask?” His mother looked down and said to him “That was worn by a group of mean people a long time ago.” My stomach churned when I heard this. I wanted so badly to correct her. My mind raced back to this past August when those same hoods terrorized my city. The KKK is not a past event. As unnerving as it is to admit, the KKK is a present reality. As the Rev. Dr. Wil Gafney of Brite Divinity School said earlier this year, “we live in an age of unhooded white supremacy.” The response to this must be one of swift and unwavering opposition. If not, we run the risk of propagating a false story of the arrival of this so-called “post-racial society.” The presentation of this hood in the museum is a startling reminder of a dark past, but as James Baldwin, a celebrated champion of black culture, says, “To accept one’s past – one’s history – is not the same thing as drowning in it; it is learning how to use it. An invented past can never be used; it cracks and crumbles under the pressures of life like clay in a season of drought” (Baldwin, The Fire Next Time). We must accept the past, understand its implications for the present, and act accordingly for the future.

In another section of the museum, I viewed Emmett Till’s casket. Emmett Till was a 14-year-old African American boy who was lynched in Mississippi in the 1950s after being accused of flirting with a white woman outside a grocery store. I was especially struck by the pictures of him as a young boy. I can see Emmett Till’s face all over the place today. I can see him in the playful faces of children who run around in parks as we walk past or in a childhood friend who looked a lot like Emmett when he was that age. Unfortunately, he can also be seen all too often on the news amidst the most recent case of police brutality in this country.  He is in the face of Trayvon Martin, Freddie Gray, Christian Taylor, Tamir Rice or any number of other victims. Emmett Till became an icon of the civil rights movement, and his legacy lives on today. He reminds us that the beast of white supremacy and racism continues to be fed by something deeply engrained in our society. It’s a beast that must be pried out from the caves of our Constitution and the depths of our Declaration. It will be liberating for some. It will be painful for most. However, if the values that we hold dearest are the same values that continue to disgrace the brutally murdered body of Emmett Till, it is of the utmost importance that they be uprooted and destroyed immediately, whatever the cost.