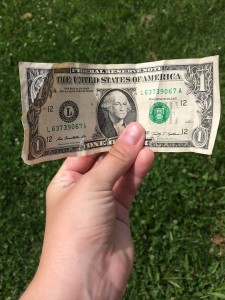 Last week, for the first time in my life, I gave a homeless man a dollar and felt no suspicion or uncertainty. After breakfast, one of the regular attendees asked me for money so that he could catch a bus to Pantops in order to arrive at his doctor’s appointment on time. Without a second thought, the dollar was out of my wallet and into his hand. However, this response was much more profound as I reflected upon it.

Before I continue, I believe that I should explain one of the reasons that I chose the Haven as my site for this internship. For three years at UVA, my daily routine would take me past the Corner, through the labyrinth of off-grounds houses and to my own house. Similarly, for three years, I was confronted by numerous people asking for money underneath the train bridge on 14th and on the pathway outside of the CVS. And for three years, my conscience was continually bombarded by the convictions of my religious tradition grappling with my own rational self-interest. How could I in good conscience give money to someone I didn’t know, with no way of knowing how they would spend it? How could I negotiate a religious doctrine that advocates for a reckless defense and aid of the poor with its command to be as “wise as serpents?” Where does “blessed are the poor” meet the wisdom given by God who “gives generously to all without finding fault?” (James 1:5). Within the boundaries of developing a theology of hospitality, one of my goals for the summer was to shed light upon this quandary and apparent paradox.

In the past weeks, I have seen hope manifest itself in the midst of deeply rooted social problems, experienced the depths of loneliness and isolation, had my comfort bubble burst and noticed that God moves in the innocuous and mundane to lead to radical transformation. If only I had noticed all of that during my conversation at the Haven with the man in need of a bus pass.

Reflecting on the encounter after the fact, I found help from Nouwen and Loring in understanding my interactions with this man. Nouwen would have characterized the second movement of the spiritual life in me: the move from hostility to hospitality. In this interpretation, we as humans fail to empathize with those around us and are inherently suspicious. Driven by our loneliness and inability to respond to our inner questions in a satisfactory way, we no longer see the problems and struggles of others as similar to our own. Our deficiencies in our own lives bleed into our interactions with the strangers we meet. “In general we do not expect much from strangers” (Nouwen, 68) and when we do, it’s often expecting the worst from them. Loring can be seen as an alternative to this suspicion. His openness to those who are homeless centers around the idea that we cannot try to impose our own desires and expectations on strangers. We often fall into this trap of “heroism,” a term used by Ekblad, assuming that we know what is best for those on the margins. Loring’s solution is to simply ask that person, “How can I be helpful?” Similarly to Nouwen, Loring’s approach calls us to open ourselves to receiving the homeless person as a guest and fellow human rather than a suspicious criminal attempting to steal what is ours. Our transition from hostility to hospitality is thus fulfilled by denying heroism and merely being available to those around us.

However, none of this theological reflection does any good if it cannot be applied back to the original encounter with the man looking for a bus ticket. Can Nouwen, Loring and Ekblad truly be incorporated into the context of the Haven? As previously stated, this introspective look at the influences playing upon me in that moment helps to explain my actions. In that instant, the man was coming to me as someone in need of money for the bus, answering Loring’s question “How can I be helpful?” Similarly, meeting that need reflected hospitality devoid of suspicion and hostility.   However, the practical application of these two theologies only set the stage for the God who takes the mundane and makes it miraculous. After I responded with hospitality (Nouwen) and met a particular need (Loring), the man began to tell me about where he was going, why he needed the money, and how the doctors he was going to see had helped him in the past. The one dollar became the price for seeing into this man’s soul. As I listened to his passions, fears, hopes, and outlook on the world around him, we began to bond. I believe that God used that dollar to humanize this man beyond my own suspicions. God took the theological work of Loring and Nouwen, blended it with my personal experience and doctrinal truth, and the result was a genuine, intimate moment in a seemingly innocuous conversation.

Our response to folks who are homeless should go much deeper than if we feel bad putting a dollar in a pan-handler’s cup. Rather, it should look at the relationships that can be built with those asking for the dollar. For some, being “helpful” is putting a dollar in their cup even if we are absolutely certain that the dollar is spent on what we deem unacceptable. Wisdom should come in prudently analyzing situations in which new, affirming relationships can be created and maintained. In those moments, instead of letting our suspicions and self-interest run wild, what if we looked for God in the innocuous? In the place of scrutiny, we could cultivate a desire for empathy and support, affirming the humanity of those on the margins and working alongside them to break the chains of addiction, mental illness, hopelessness, and isolation. Instead of analyzing others to determine if they are destitute enough for our help, we could direct our wisdom toward affirming the humanity of someone else who may feel completely cast aside. How different would our interactions with homeless people look if we attempted to see God in the dollar bill and pursued the opportunities that he gives to build relationships and show others that they have worth?