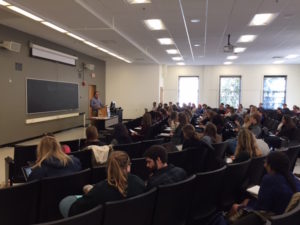 A Critique of the Gun Rights Movement

On March 14, Firmin DeBrabander delivered a guest lecture entitled, “A Philosophical Reflection on the Gun Lobby.” In response to the gun rights movement that has driven the United States into achieving the highest rate of private gun ownership in the world today, DeBrabander argued that our freedom is greatly hindered by this armed society.

Discussing its threat to the very basis of civil society, he noted how the recent legislative efforts of campus carry, permitless carry, and Stand Your Ground laws are a dangerous invasion of the public sphere that undermines member discourse and democracy at large. Transitioning into the Catholic church’s teaching of the social good, DeBrabander closed with a call for faith believers to turn back the radical agenda of the NRA that impairs us as individuals, as human beings, and as God’s creation.

What is going on here? Why does the U.S. defy the trend seen in other industrialized democracies and expand gun rights with each mass shooting? Why do we tolerate this obscene death toll and widespread misery? Why is the NRA’s radical agenda ascendant?

Taken together, this radical agenda is nothing less than an experiment in radical gun rights that we the American people are subjected to. It’s an experiment in gun rights such as the nation has never experienced or undergone… I think we are at a point where faith-based communities, and Christian communities in particular, can provide a powerful push for gun control.”

To listen to the full lecture, visit its resource page here.

Firmin DeBrabander is professor of philosophy at the Maryland Institute College of Art in Baltimore. He completed his graduate studies at the Katholieke Universities Leuven in Belgium, and at Emory University in Atlanta. His publications include Spinoza and the Stoics (Continuum Press, 2007) and Do Guns Make us Free? (Yale University Press, 2015). He has written articles on social and political commentary (notably on the gun debate) in a variety of national publications, including The Baltimore Sun, The New York Times, the Washington Post, the Atlantic, the New Republic and Salon.