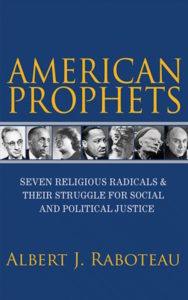 Seven Religious Radicals and Their Struggle for Social and Political Justice

In his latest release, acclaimed religious scholar Albert Raboteau explores the theology and legacy of seven major prophetic figures in twentieth-century America: Joshua Heschel, A. J. Muste, Dorothy Day, Howard Thurman, Thomas Merton, Martin Luther King, Jr., and Fannie Lou Hamer. Called to social activism to address the suffering of others, these leaders professed their faith through acts of writing, speaking, and demonstrating. Raboteau examines the influences that inspired them, the theology that grounded them, and the ways in which they convinced generations of Americans to join their cause. American Prophets illustrates the profound meaning lying at the intersection of thought and action, an inspiring testimony to lived theology at its best.

“Compelling and provocative. . . . A momentous scholarly achievement as well as a moving testimony to the human spirit, American Prophets represents a major contribution to the history of religion in American politics. This book is essential reading for anyone who is concerned about social justice, or who wants to know what prophetic thought and action can mean in today’s world.” -Rabbi Dov Peretz Elkins, JewishMediaReview

“Albert Raboteau is the legendary godfather of Afro-American religious studies. He also is one of the exemplary spiritual radicals of our time. This wise and courageous book solidifies both well-deserved reputations.”-Cornel West

“Albert Raboteau’s magnificent American Prophets is a book that will make our hearts soar. Courageous, wise, and deeply compassionate, Raboteau’s prophets are political activists–Jews and Christians, blacks and whites, men and women–imbued with a deep faith in God and humanity. An inspiring journey into the inner lives of extraordinary human beings.”-Susannah Heschel, author of The Aryan Jesus: Christian Theologians and the Bible in Nazi Germany

Albert J. Raboteau arrived at Princeton in 1982 as a specialist in American religious history. His research and teaching have focused on American Catholic history, African-American religious movements, and the place of beauty in the history of Eastern and Western Christian Spirituality. His other publications Slave Religion: The ‘Invisible Institution’ in the Antebellum South (2004) and A Fire in the Bones: Reflections on African-American Religious History (1996). He was the first recipient of the J.W.C. Pennington Award from the University of Heidelberg and delivered the Stone Lectures at Princeton Theological Seminary in 2012. He retired in June 2013.