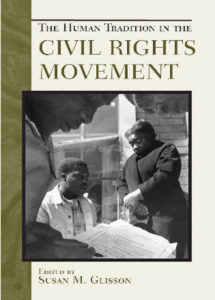 The civil rights movement is popularly remembered through the initiative of Martin Luther King, Jr. and the tumultuous era of 1954-1965. In The Human Tradition in the Civil Rights Movement, seventeen writers breakaway from this traditional approach to commemorate the lesser-known, though equally important, change-makers that propelled efforts at the grassroots level.

Featuring leaders such as Ida B. Wells, James K. Vardaman, and Sylvia Rivera, the publication emphasizes the role individual agency would play in directing this movement and in influencing countless others to follow. The result, edited by PLT Contributor Susan Glisson, is a collection of narratives that captures the long, arduous struggle for national social change and civic renewal through the eyes of everyday revolutionaries.

Reviews of the book include:

“Glisson’s volume convincingly argues that the civil rights movement was not always top-down and that local grassroots organizers deserve recognition from scholars and the general public alike.” —The Journal Of Mississippi History

“Susan Glisson has assembled a stellar cast of scholars to tell the stories of individual Americans engaged in the struggle for human rights. This remarkable collection of essays is at once inspiring and sobering. It demonstrates that ordinary people can accomplish extraordinary things. But it also reminds us of the distance still to be traveled before this country lives up to its democratic promise.” —John Dittmer, DePauw University

Susan M. Glisson has served as executive director of the Winter Institute for Racial Reconciliation since 2002. A native of Evans, Georgia, she earned bachelor’s degrees in religion and history from Mercer University, a master’s degree in Southern studies from the University of Mississippi and a doctorate in American studies from the College of William and Mary. Glisson specializes in the history of race and religion in the United States, especially in the black struggle for freedom. She has numerous publications, has been quoted widely in the media and has supported community projects throughout the state for the Institute since its inception.