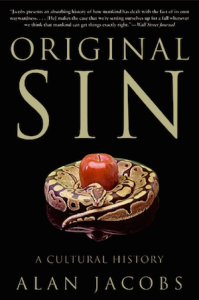 Controversy has always presided among the various doctrinal interpretations in religion, but perhaps none has created as much friction as that of original sin, the idea that humans are born into this world predisposed to evil and sin. For centuries, theologians have argued for and against the belief, and the debate continues today. In Original Sin, Alan Jacobs takes readers on a sweeping tour of the idea of original sin, its origins, its history, and its proponents and opponents. And he leaves us better prepared to answer one of the most important questions of all: Are we really, all of us, bad to the bone?

In an excerpt provided by HarperOne, Jacobs writes:

“It is the common fate of doctrines to be dismissed; you’d almost think that’s what they were made for… But of all the religious teachings I know, none- not even the belief that some people are eternally damned- generates as much hostility as the Christian doctrine we call “original sin.” It is one of the most “baleful” of ideas, says one modern scholar; it is “repulsive” and “revolting,” says another. I have seen it variously described as an insult to the dignity of humanity, an insult to the grace and loving-kindness of God, and an insult to God and humankind alike. And many of those who are particularly angry about the doctrine of original sin are Christians… What is this belief that generates such passionate rejection and such equally passionate defense?”

Read more on this publication here.

Alan Jacobs is the Distinguished Professor of the Humanities in the Honors Program at Baylor University. Jacobs’s work revolves around multiple interests, primarily literature, theology, and technology. His other publications include The Book of Common Prayer: A Biography (2013) and The Pleasures of Reading in an Age of Distraction (2011).