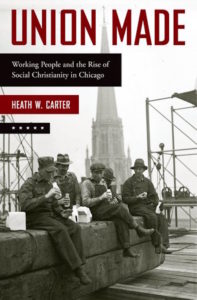 Working People and the Rise of Social Christianity in Chicago

While the late 1800s brought a period of tremendous economic growth to the United States, this Gilded Age also revealed the extreme poverty and inequality suffered by the working class. In Union Made, author Heath W. Carter credits the beginnings of a new discipline– American Social Christianity– to these common laborers rather than the more often credited middle-class spiritual leaders of the day.

Workers believed God stood behind organized labor; institutional church leaders had strayed from the true gospel in their suspicions and reservations. With more and more working believers turning away from a false church, Carter writes that American Christianity was saved only when pastors embraced the plight of the common man in the spirit of the Social Gospel. Penned in the midst of a “New Gilded Age” developing today, Union Made offers a new way forward through lessons from the past.

“In contemporary America, where the gulf between the rich and poor threatens to yawn that wide again, Christianity and conservative politics have become so intertwined that many American believers are convinced that their faith mandates small government….Carter, however, shows us a different route.” —Church History

“No mere opiate or tool of oppression, working-class faith emerges from the pages of this extraordinary book as the generative force that made the nineteenth-century social gospel viable. Social Christianity made resistance against industrial capitalism and its barons a possible and necessary thing. Combining the finest qualities of classic social, urban, and labor histories with the curiosities of our scholarly (and political) moment, Union Made is a sharp, much-needed reminder that American Christianity has not always been free-market in persuasion or comfortable on the corporate side. Beautifully crafted, it is also a stirring must-read.” –Darren Dochuk, author of From Bible Belt to Sunbelt: Plain-Folk Religion, Grassroots Politics, and the Rise of EvangelicalConservatism

“In recovering these working-class voices, Carter makes a significant scholarly contribution to the field of American religious history while also deepening our understanding of the labor movement during the Gilded Age and Progressive Era. More than just recasting the origins of Social Christianity, he reminds us of the profound moral debates that surrounded the rise of industrial capitalism and reveals how workers campaigned for justice as forcefully and ardently within the religious sphere as they did in the political and economic arenas.” –Thomas Rzeznik, The Journal of the Gilded Age and Progressive Era