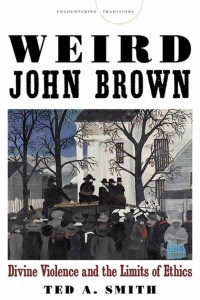 Divine Violence and the Limits of Ethics

Religion and politics produce a deadly combination, often inciting strife and violence in its wake. In an effort to limit these catastrophic consequences, many believe violence needs to be approached from a purely secular perspective void of any religious connotations. In Weird John Brown, Ted Smith rejects this view by arguing that a secular context triggers unimaginable violence of its own. Delving into the American political landscape and examining reflections by nineteenth-century abolitionist John Brown, Smith writes that violence is limited by way of deeper religious reflection rather than separation from religion all together. A new take on American history, Weird John Brown will change the reader’s understanding of ethics, religion, and violence.

“Ted Smith has given us something that heretofore has not existed, a very sophisticated philosophical and theological reflection on John Brown and the question of divine violence. Smith not only analyzes the shortcomings of ethical reasoning and moral vision locked within an immanent frame against the backdrop of the complexity of John Brown, but he also explores the racial unconscious embedded in the American political unconscious in ways both refreshing and convincing. This book teaches John Brown. It gives us a John Brown restored to his preeminent place as a mirror of the dilemmas of an American world, a white world that has forgotten we exist in God’s world.”

Dr. Ted A. Smith is assistant professor of teaching and ethics at Candler School of Theology. He works at the intersections of practical and political theology, with special attention to the forms preaching and worship take in modern societies. His other publications include The New Measures:  A Theological History of Democratic Practice (2007).  Smith’s current research explores the notion of “divine violence” through a study of sermons, speeches, and essays about the abolitionist John Brown.

Rev. Dr. Willie James Jennings is Associate Professor of Systematic Theology and Africana Studies at Yale Divinity School. Jennings teaches in the areas of systematic theology and black church and cultural studies. The author of numerous articles, his research interests include these areas as well as liberation theologies, cultural identities, and anthropology. An ordained Baptist minister, Jennings has served as interim pastor of several North Carolina churches and continues to be an active teaching and preaching minister in the local church. He is the winner of the 2015 Louisville Grawemeyer Award in Religion.