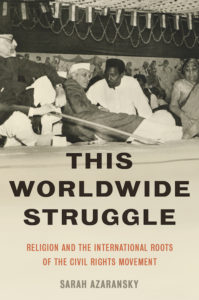 On the Civil Rights Movement in its Global Context

On Tuesday, May 2, PLT Contributor Sarah Azaransky will deliver a guest lecture at UVA on her forthcoming book, This Worldwide Struggle: Religion and the International Roots of the Civil Rights Movement (Oxford University Press, 2017).

Azaransky’s research reveals fertile intersections of worldwide resistance movements, American racial politics, and interreligious exchanges that crossed literal borders and disciplinary boundaries, and underscores the role of religion in justice movements. Shedding new light on how international and interreligious encounters were integral to the greatest American social movement of the last century, This Worldwide Struggle confirms the relationship between moral reflection and democratic practice, and it contains vital lessons for movement building today.

Reviews and endorsements of the book include:

“The long civil rights movement has needed an expansive religious history. This is it and so much more. Inventively following this set of Christian thinkers and activists across the globe and toward various religions, Sarah Azaransky has shed new light on the most pivotal innovation of the twentieth-century: genuine democracy. This Worldwide Struggle is not just great history; it’s religious, moral, and ethical reflection for all lovers of democracy and justice.” –Edward J. Blum, co-author of The Color of Christ: The Son of God and the Saga of Race in America

“More than any other, this book reveals the many extensive international relationships that African American religious scholars and civil rights activists established between the 1930s and 1950s. This much needed book, rich in historical data, will be welcomed by all its readers for its compelling evidence concerning the world-wide significance of the Civil Rights Movement in the United States through its connection with anti-colonial movements in Asia and Africa.” –Peter J. Paris, Elmer G. Homrighausen Professor Christian Social Ethics, Emeritus, Princeton Theological Seminary

The presentation will begin at 2:00pm in Wilson Hall 301. Admission is free, and the public is invited to attend. For details and release information on the new book, click here.

Sarah Azaransky is an assistant professor of social ethics at Union Theological Seminary. Her publications include The Dream is Freedom: Pauli Murray and American Democratic Faith (Oxford University Press, 2011) and an edited volume, Religion and Politics in America’s Borderlands (Lexington Books, 2013).