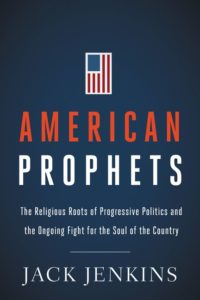 In American Prophets, author Jack Jenkins discusses the Religious Left, an amorphous group of interfaith activists that has operated since America’s founding — praying, protesting, and marching for common goals that have moved society forward. This idea is in direct opposition to the typical view of religion in American politics, which centers the Religious Right, an organization thought to be driven by a coalition of fundamentalist powerbrokers who are the “moral majority,” and who set the standard for conservative Christian values and working to preserve the status quo.

Drawing on his years of reporting, Jenkins examines the re-emergence of progressive faith-based activism, detailing its origins and contrasting its goals with those of the Religious Right. He profiles Washington political insiders, as well as a new generation of progressive faith leaders at the forefront today, including:

Throughout our history, the Religious Left has embodied and championed the progressive values at the heart of American democracy, including abolition, labor reform, and civil rights. Jenkins uses this book to discuss the past and current iterations of the Religious Left, while changing the way we think about the intersection of politics and religion today.

“Jenkins is my go-to source when I want a snapshot of what’s happening in the American religious landscape… demonstrating how a vibrant and undeterred Religious Left has filled the moral vacuum with an unapologetically progressive agenda promoting peace, pluralism, and human dignity for all.”— Reza Aslan, author of Zealot: The Life and Times of Jesus of Nazareth

“Delves deeply into the origins, activities, and leadership of the Religious Left . . . highlighting the widespread—though not always widely recognized—role that progressive faith communities have long held in political and social causes. . . . A well-researched and timely work of journalism.”— Kirkus Reviews

“A contemporary ‘Lives of the Saints’—a series of profiles of admirable leftist activists whose politics are motivated by their faith. . . . The problem isn’t that there has not yet been a potent religious left; it’s that the ‘religious’ part is too often left out.”—The New Yorker