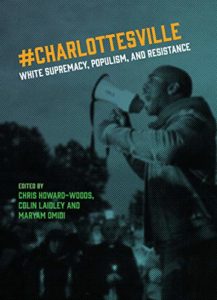 In #Charlottesville: White Supremacy, Populism, and Resistance, readers are asked to grapple with the fact that it may no longer be possible to be a moderate in this political climate. When white nationalists and their supporters clashed with counter-demonstrators in the college town of Charlottesville over the removal of a Confederate statue, resulting in the death of one anti-racist activist and the wounding of thirty-five more, it fundamentally changed the way many people thought about America.

Suddenly, U.S. citizens who had previously thought of themselves as moderate began to wonder whether violence in defending their values against fellow citizens was not only an option, but a necessity—whether the way American history has been commonly presented is not only unfair but inaccurate; whether the current President is to blame for the sudden visibility of white supremacist groups; and finally, whether a surge in racism and ultra-nationalism is irrevocably re-shaping the country.

“Decent American citizens currently find themselves facing what daily feels like social and political disaster. The presidency of Donald Trump is not the first to sympathize with white supremacy, but his and the present administration’s shameless racism raises fresh questions about recent narratives of America’s post-racial triumph. #Charlottesville: Before and Beyond is a crucially timely volume collecting an impressive and necessary range of activists, public figures, and academics ruminating on the precedents of alt-right white supremacists descending on Charlottesville, VA in 2017, the resulting death of Heather Heyer, and, importantly, how we should measure our expectations and actions in putting America on a more firm footing in the project of racial redemption. An essential volume for all concerned citizens: academics, students, and the general public.” ―Chris Lebron, Professor of Philosophy, Johns Hopkins, author of The Making of Black Lives Matter: A Brief History of An Idea

“It’s one thing to deplore the events at Charlottesville and another to probe the circumstances that rendered them possible. This book admirably fulfills the second need without ever losing sight of the first.” —Nancy Fraser, Henry and Louise A. Loeb Professor of Philosophy and Politics at the New School for Social Research, author of Fortunes of Feminism: From State-Managed Capitalism to Neoliberal Crisis