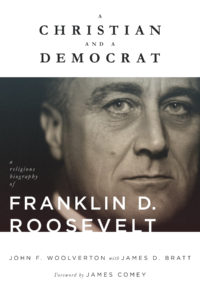 A work begun by religious historian John Woolverton (1926-2014) and recently completed by James Bratt, A Christian and a Democrat is an engaging analysis of the surprisingly spiritual life of one of the most consequential presidents in US history, Franklin Delano Roosevelt.

When asked at a press conference about the roots of his political philosophy, FDR responded simply, “I am a Christian and a Democrat.” This is the story of how the first informed the second—how his upbringing in the Episcopal Church and matriculation at the Groton School under legendary educator and minister Endicott Peabody molded Roosevelt into a leader whose politics were fundamentally shaped by the Social Gospel.

A Christian and a Democrat chronicles FDR’s response to the toxic demagoguery of his day, and will reassure readers today that a constructive way forward is possible for Christians, for Americans, and for the world.

“This timely, inspiring portrait of the role of Christianity in the life and presidency of Franklin Delano Roosevelt helps us better understand one of the influential leaders of the twentieth century. Woolverton has made a great contribution here that should lead us to reevaluate our view of the role of faith in the progressive movement, the Democratic Party, and American politics generally, while also stoking our imagination for how Christian principles might guide us today.”—Michael Wear, author of Reclaiming Hope: Lessons Learned in the Obama White House about the Future of Faith in America

“Rare is the opportunity to read a biography by someone who ran in the same circles as the author but who was not an acquaintance. Through a collective biography of FDR’s many influences and their religious backgrounds, we learn that Franklin Roosevelt had the Social Gospel imprinted on his character. His boarding school teachers, as well as those of his wife Eleanor and his Secretary of Labor, Frances Perkins, raised him with a strong sense of responsibility toward the less fortunate. This Social-Gospel-sense of “Christian charity” drove both his concern for the poor and his rejection of authoritarian methods of establishing justice. Woolverton and Bratt depict a man whose ‘simple faith’ drove his decisions in both domestic and foreign policy. It was this faith, they suggest, that helped save the prospects for democracy in the United States.”—Janine Giordano Drake, University of Providence

“With James D. Bratt’s deft revision, this study of Franklin Roosevelt’s religious life by respected Episcopal historian John Woolverton arrives at just the right time. Woolverton’s warm but frank spiritual biography describes a president who practiced a Christianity based on hope, charity, and faith and grounded in a deep sense of mutual responsibility. This book is a reminder that American Christianity might have followed an alternative trajectory into the twenty-first century.”—Alison Collis Greene, Emory University