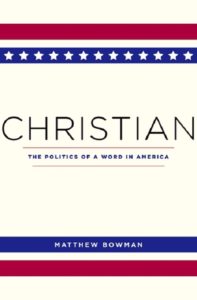 The Politics of a Word in America

In Christian: The Politics of a Word in America, historian Matthew Bowman traces how the term “Christian” had numerous meanings to different groups in the United States. Bowman examines how the rise of Western Civilization Courses at Columbia University in the early twentieth century underpinned attempts to connected Christianity and American democracy, while the African-American faculty of Howard University worked out how Christianity fit into challenging white supremacy. The book captures a multitude of voices, most of them claiming to be the most authentic representation of Christianity. Bowman’s work shows how from contemporary conceptions of “Christian” being tied to the political right to historical developments, the term has always been a contested one.

“Bowman tells the rich and complex story of how the term ‘Christian’ moved rightward from the Civil War to the present, through a series of fascinating chapters that cover unusual and unexpected topics. Anyone who wants to know why ‘Christian nation’ has come to mean what it does today will want to read this expertly argued book.”—Paul Harvey, author of Christianity and Race in the American South

“A thought-provoking series of case studies that charts the long history of Christian political rhetoric in the United States… Most striking for our current political moment may be Bowman’s attention to the ways the politically powerful have used Christianity to claim a divine right to govern, derived—as they saw it—from the superiority of a racialized white Christian cultural heritage. Bowman, in this rigorous study, persuasively argues that Christianity has shaped a collective understanding of the national past and continues to lend spiritual weight to competing visions for America’s future.”—Publisher’s Weekly

“Spanning American history from Reconstruction to the present, Bowman’s book shows that the word ‘Christian’ has persistently borne political and cultural meanings that far transcend theological beliefs and religious practices. Elegantly written, deeply researched, and persuasively argued, Christian sets a gold standard for serious scholarship about a topic that matters.”—Grant Wacker, author of America’s Pastor: Billy Graham and the Shaping of a Nation