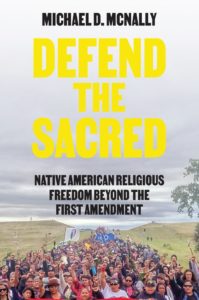 In Defend the Sacred: Native American Religious Freedom beyond the First Amendment, author Michael McNally explores how Native Americans have repeatedly asserted legal rights to religious freedom to protect their sacred places, practices, objects, knowledge, and ancestral remains. Unfortunately, these claims have met with little success in court because Native American communal traditions don’t fit easily into modern Western definitions of religion; in response, Native peoples have creatively turned to other legal means to safeguard what matters to them.

In addition to continuing to invoke religious freedom, Native peoples have resourcefully used the languages of cultural resources under environmental and historic preservation law; of sovereignty under treaty-based federal Indian law; and, increasingly, of Indigenous rights under international human rights law in order to protect what is theirs. This book attempts to showcase the story of Native American advocates and their struggle to protect their liberties by discussing the innovative strategies they use in order to do so.

“This book tells the story of Native Peoples’ urgent and complex struggle for religious and cultural freedoms. Michael McNally stands witness to our urgency about protecting sacred places, defending ancestors, and continuing traditional ways, especially those in danger of desecration and harm. He traces and makes understandable the complex legal barriers that impede our free exercise of traditional religions and the maze of laws we stitch together for current protections and future possibilities. I urge activists, advocates, allies, policymakers, judges, lawyers, and traditional practitioners to read this book.”—Suzan Shown Harjo (Cheyenne & Hodulgee Muscogee), President, The Morning Star Institute

“Defend the Sacred is a pathbreaking work of scholarship that sets a new standard and has the potential to impact public debates around Native American religious freedom.”—Tisa Wenger, Yale University

“Defend the Sacred is a very readable history of the collisions between the U.S. Constitution and Native American religious freedom. McNally demonstrates in compelling fashion that U.S. law protects other Americans better than it protects Native Americans, even when it comes to America’s most fundamental values.”—Kevin K. Washburn, Dean, University of Iowa College of Law