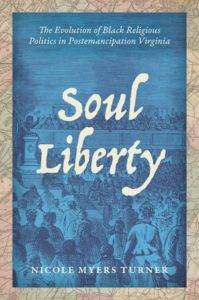 The Evolution of Black Religious Politics in Postemancipation Virginia

In Soul Liberty, Nicole Myers Turner challenges the idea of black churches as having always been politically engaged. She uses local archives and church and convention minutes to show how freedpeople in Virginia adapted strategies for pursuing the freedom of their souls to worship as they saw fit—and to participate in society completely in the evolving landscape of emancipation.

As emancipation included opportunities to purchase properties, freedpeople sought to organize the geographies that they could in favor of their religious and political agendas at the outset of Reconstruction. After freedmen obtained the right to vote, an array of black-controlled institutions increasingly became centers for political organizing on the basis of networks that mirrored those established earlier by church associations.

“How did black Christians in the South organize themselves both religiously and politically in the wake of the Civil War? Nicole Turner’s answer to that question unfolds in a nuanced and forceful demonstration that challenges common views of black political activity in churches. Turner’s methodology combines traditional archival materials with more recent tools such as GIS mapping, reminding historians that new understandings of the past come from new ways of approaching the sources and the data.”—Mary Beth Mathews, University of Mary Washington