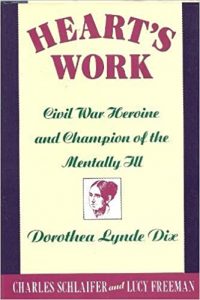 Dorothea Dix was born in 1802, and managed to fight through illness and a traumatic childhood in order to become one of the most well-respected nurses of the civil war and an early proponent of social reform. In Heart’s Work, authors Charles Schlaifer and Lucy Freeman track Dorothea’s remarkable journey from her birthplace in Maine to her eventual death in New Jersey where she finally succumbed to the illnesses that had plagued her throughout life.

At a time when the mentally ill were cast aside and forgotten, Dorothea Dix made it her mission to visit mental hospitals across the US and report her findings to the government, pushing for more care and humane treatment. She took this caring but intelligent attitude with her when the Civil War started and she was named the Superintendent of Army Nurses for the Union Army, enforcing strict standards of care for her patients and pushing for nurses to have more opportunities. Although she has received little notice today for her groundbreaking work, Schlaifer and Freeman are able to rectify that in this long overdue work.

“In an era when woman’s work centered primarily on hearth and home. Dorothea Lynde Dix won the respect of men and women alike through her quiet determination and selfless dedication to help those imprisoned in troubled minds. Freud was just a boy during the years Dix traveled across the United States, later to Europe and Japan, to found scores of hospitals for the indigent insane. Weakened by chronic tuberculosis, Dix doggedly pursued her cause. During the Civil War, she put her work for the mentally ill on hold to supervise nurses who treated wounded soldiers. Despite her ill health, Dix lived to be 85, dying in 1887 in the first hospital she had founded, in Trenton, N.J. Schlaifer (coauthor of Action for Mental Health ) and Freeman ( Fight Against Fears ) tell Dix’s story in a matter-of-fact… manner, using letters to illustrate the profound effect she had on her friends and fellow citizens.” — Publisher’s Weekly