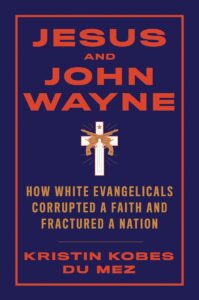 How White Evangelicals Corrupted a Faith and Fractured a Nation

Jesus and John Wayne, by Kristin Kobes Du Mez, is an in-depth look into why white evangelicals overwhelming voted for Donald Trump in 2016, despite his obvious lack of knowledge of the Christian faith. In a comprehensive history of the evangelical movement in America, Du Mez challenges the commonly held assumption that the “moral majority” backed Trump for purely pragmatic reasons, and reveals that he in fact represents the fulfillment, rather than the betrayal, of white evangelicals’ most deeply held values.

While many people focus only on the religious of aspect of white evangelicals, Du Mez argues that one must understand the role of culture in modern American evangelicalism. They have worked for decades to replace the Jesus of the Gospels with an idol of rugged masculinity and Christian nationalism, and they have been helped along by the heroes of evangelical pop culture: Oliver North, Ronald Reagan, Mel Gibson, and, chiefly, John Wayne. All white men who tell it like it is and assert white masculine power in defense of “Christian America,” much like what many evangelicals consider Trump to be doing now.

The hateful values at the heart of white evangelicalism today are likely to persist long after Trump leaves office, but even after their strongman has no more power, their support of him and their twisting of Christian views will have lasting consequences for us all.

“Jesus and John Wayne demolishes the myth that Christian nationalists simply held their noses to form a pragmatic alliance with Donald Trump. With brilliant analysis and detailed scholarship, Kristin Kobes Du Mez shows how conservative evangelical leaders have promoted the authoritarian, patriarchal values that have achieved their finest representative in Trump. A stunning exploration of the relationship between modern evangelicalism, militarism, and American masculinity.” – Katherine Stewart, author of The Power Worshippers: Inside the Dangerous Rise of Religious Nationalism

“Wielding supreme command of evangelical theology, popular culture, history and politics, as well as rare skill with the pen, Kristin Kobes Du Mez explodes the myth that evangelicals voted for Donald Trump in spite of his crude machismo. It turns out that the opposite is true: for generations, white male evangelical leaders and their supportive wives have been building a movement of brazen masculinity and patriarchal authority, with hopes of finding a warrior who could extend their power to the White House. In Trump they found their man. This is a searing and sobering book, one that should be read by anyone who wants to grasp our political moment and the religious movement that helped get us here.” – Darren Dochuk, author of Anointed With Oil: How Christianity and Crude Made Modern America

“I endorse Kristin Du Mez’s lively and readable account of evangelical political history, having personally seen it from the inside during nearly three decades with the National Association of Evangelicals. Those who legitimately ask “How can evangelicals support Donald Trump?” need to read this book to understand why. An extraordinary work.” – Reverend Richard Cizik, President of the New Evangelical Partnership for the Common Good