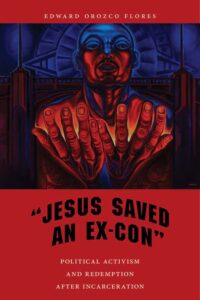 Political Activism and Redemption after Incarceration

The use of religion to rehabilitate and redeem formerly incarcerated individuals has been around for many years, but it typically places an emphasis on private spirituality, with efforts focused on repentance, conversion, and restorative justice. In Jesus Saved an Ex-Con, author Edward Orozco Flores examines two faith-based organizations that utilize the public arena to expand the social and political rights of former inmates.

Most work on prisoner reentry has focused on how the behavior of those with records may be changed through interventions, rather than considering how those with records may change the society that receives them. Community Renewal Society and LA Voice reject this narrative, and instead focus on expanding the rights of people with records through community organizing campaigns. Flores explores how the formerly incarcerated use redemption scripts to participate in civic engagement, to remove the felony conviction question from employment applications and to restrict the use of criminal background checks in housing and employment. He shows that people with records can redeem themselves, but we must also challenge the way society receives them.

“In this book, Edward Orozco Flores contributes to the growing debate on criminal justice reform by showing how ex-prisoners now ‘returning citizens’ are giving back to American communities. They give back not only by sharing their personal stories of moral redemption, but also by reclaiming forms of civic life and political empowerment against the grain of elite manipulation. Drawing on scholarly work in the sociology of religion, social movements, and civic life, Flores argues that ‘prophetic redemption’ may not only redeem ex-offenders own stories but also redeem the full promise of American democracy against the imposters that claim to speak in its name.”—Richard L. Wood, author of A Shared Future: Faith-Based Organizing for Racial Equity and Ethical Democracy

“In this powerful work, Flores challenges the top-down bias of criminal justice reform … Flores’s concepts of pastoral and insurgent prophetic redemption will be useful to scholars studying religious social movements, and the book’s broad themes make it valuable for diverse sociological audiences. A welcome addition to criminal justice literature as well as to the literature on the sociology of religion and social movements.”—Choice