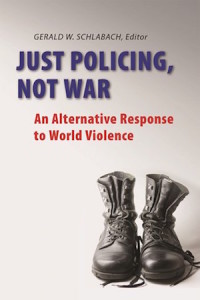 An Alternative Response to World Violence

Churches have long discussed the proper approach to war and peace. While peace churches favor pacifism, others, such as the Catholic church, support the just war theory. In this 2007 publication, PLT contributor Gerald Schlabach reflects on recent events in world history and argues that the time has come to reconsider the Christian response to war. As a middle ground between pacifism and just war, he offers the just policing theory. If the world can address problems of violence through a police model instead of a conventional military model, there may be a role for Christians from all traditions. Including reflections from different thinkers on this just policing theory, the publication offers valuable discussions on the warfare and distress Christians struggle to navigate through in an increasingly-violent world.

In an excerpt provided by Liturgical Press, Schlabach writes:

The concept of just policing clearly places the focus on achieving justice in human society, rather than on simply reacting to war when it breaks out. It is inherently proactive. And it takes seriously the need to have a practical means to respond to injustice when it occurs, as inevitably it will in a world filled with inherited evil…

Just policing’s most hopeful potential as a concept is its ability to provide a common base on which Christians on both sides of the political spectrum can join forces. Just policing is something both liberals and conservatives can support. There will of course be vigorous debates over precisely what constitutes just policing, and how best to carry it out in specific cases, but that is as it should be. We will never have truly just policing on any level in society without the contributions of everyone involved. What is essential is that the need for policing and the need for it to be done justly both be acknowledged.

The new epoch that has opened before us is a major opportunity, one of the most important in all Christian history. Let us accept it as a gift, and move forward in humility and in strength.

To more of the excerpt, click here. Find more information on the publication here.

Gerald Schlabach is a professor in the Department of Theology and past chair of the Department of Justice and Peace Studies at the University of St. Thomas in St. Paul, Minnesota. A Roman Catholic as of Pentecost 2004, Schlabach is a Benedictine oblate, is deeply involved in the Bridgefolk movement for grassroots dialogue and unity between Mennonites and Catholics, and continues to call himself a “Mennonite Catholic.” His publications include Unlearning Protestantism: Sustaining Christian Community in an Unstable Age (2010) and Sharing Peace: Mennonites and Catholics in Conversation (2013).