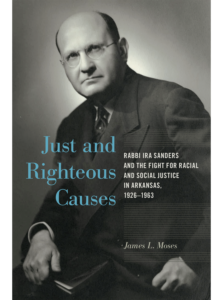 Rabbi Ira Sanders and the Fight for Racial and Social Justice in Arkansas, 1926-1963

Rabbi Ira Sanders was a dedicated advocate for social justice long before the term entered everyday usage. He led Little Rock’s Temple B’nai Israel for nearly forty years, and was a trained social worker in addition to being a rabbi. Just and Righteous Causes, by James L. Moses, is a complete biographical study of Sanders, and examines how this bold social-activist rabbi expertly navigated the intersections of race, religion, and gender to advocate for a more just society.

When Sanders arrived in Little Rock from New York in 1926, he began began striving against the Jim Crow system almost immediately. His career as a dynamic religious and community leader spanned the traumas of the Great Depression, World War II and the Holocaust, and the social and racial struggles of the 1950s and 1960s. This book balances scholarly and narrative tones to provide a personal look into the complicated position of the southern rabbi and the Jewish community throughout the political struggles of the twentieth-century South.

In 1957, he appeared in front of the state legislature to urge compliance with Brown v. Board of Education and encourage the desegregation of school districts. This is an excerpt from that speech:

“The state of Arkansas is very dear to me. It has provided me the opportunity to serve many causes in social welfare, touching both colored and white citizens, Jew and Christian alike. And in recognition of these efforts, the University of Arkansas in 1951 conferred upon me its highest honorary degree—Doctor of Humane Letters. I say this with the deepest humility, so that you may know why I doubly love this State and want to keep unsullied its good name. I would be unworthy of the sacred trust did I not raise my voice in protest of all four measures… I believe that the words of Leviticus 25 are the bedrocks upon which American democracy alone can survive. That are these words inscribed on our Liberty Bell: “Ye shall proclaim liberty throughout the land unto all the inhabitants thereof.” Our nation must be based on liberty and justice for all peoples, whose contributions to the cultural pluralism of our land have been great and varied. The dignity of the individual must never be destroyed by granting the state those powers which would deny anyone the liberty and the freedom guaranteed by the Constitution. These four bills on which we are speaking tonight were all concerned with the thought of circumventing the highest legal authority of the land. They will never stand the test of time, for higher than the legal law of the land stands this moral law of God. It operates slowly but surely, and in the end justice will prevail.”